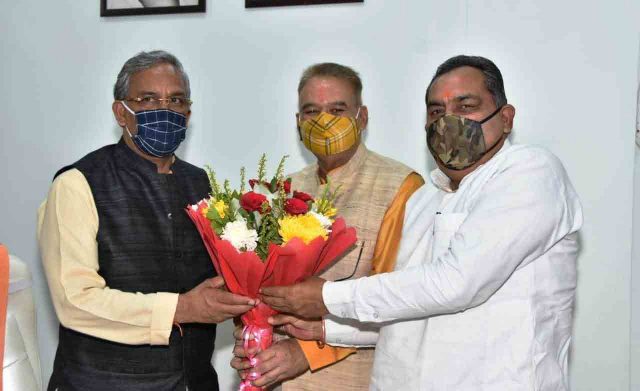 By OUR STAFF REPORTER
Dehradun, 5 Nov: Mussoorie MLA Ganesh Joshi and Sahaspur MLA Sahadev Pundir today met Chief Minister Trivendra Singh Rawat and thanked him for giving exemption in house tax for the next 10 years to the Gram Panchayats recently included in the municipal corporation area.
During the meeting at the Chief Minister’s residence, MLA Joshi said that this historic decision of the government would benefit lakhs of people. He said that eight gram panchayats of his Mussoorie assembly constituency were included in the municipal corporation area and at that time, also, Chief Minister Rawat had promised that house tax would not be taken from these gram panchayats for the next 10 years.
He expressed satisfaction that the Chief Minister did what he said. He thanked the Chief Minister on behalf of all the people.
Sahaspur MLA Sahdev Singh Pundir was also present on the occasion.