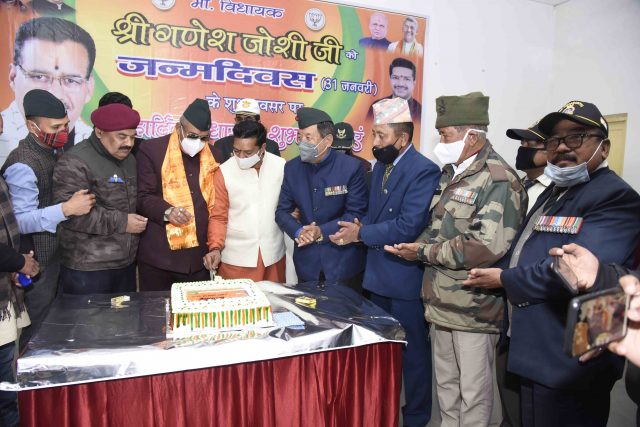 By Our Staff Reporter
Dehradun, 31 Jan: The 63rd birthday of Mussoorie MLA Ganesh Joshi was celebrated by BJP activists with great zeal while maintaining Covid-19 protocols. The same was done by ex-servicemen in Garhi Cantt, BJYM members in Jakhan and the BJP Mahila Morcha in Mussoorie.
Joshi was present at the ex-servicemen’s celebration, where a cake was cut to mark the occasion. Ajay Kumar presented a book to Joshi and said that a large number of people had joined the MLA in his effort to serve the public. He asserted that the BJP was always concerned about the welfare of ex-servicemen
Joshi remarked that his being an ex-serviceman had played a big role in his getting elected as an MLA. He mentioned the work done by the BJP for ex-servicemen. Also present were Rajiv Gurung, TD Bhutia, Shamsher Singh Bisht, Mahavir Singh Rana, Chandravir Thapa, RS Bhandari, Dinesh Pradhan, Jyoti Kotia, Sandhya Thapa, etc.
The Chief Guest at the BJYM celebrations was RS MP Naresh Bansal. He congratulated Joshi by presenting him a bouquet.
Bansal reminded that Joshi was a three time MLA, who had won each successive election with a larger margin. He appealed to party activists to ensure that this record was maintained in the coming election. He even hinted that Joshi could be appointed to a senior position in the coming year.
MLA Joshi cut a cake with the youth activists and joined in a lively celebratory ‘pahadi’ dance.
Present were Poonam Nautiyal, Ratan Singh Chauhan, Ajit Chaudhary, Kamli Bhatt, Anshul Chawla, Ankit Joshi, Ajay Rana, Amit Panwar, Samir Dobhal, Rakesh Joshi, Sanjay Nautiyal, Kamal Thapa, Chunni Lal, etc.
Another celebration took place at Pathariya Peer, where MLA Joshi distributed books, pens, etc., to 300 children.
The BJP Kisan Morcha celebrated at the Badrinath Temple on Nashvilla Road by distributing ‘kheer’ to people. Present were Chaman Lal Balmiki, Pradeep Rawat, Satyendra Nath, Dr Babita Sahotra, Bhavna Chaudhary, etc.
Present at the celebrations held at Picture Palace in Mussoorie by the Mahila Morcha were Mohan Petwal, Kushal Rana, Deepak Pundeer, Vir Singh Chauhan, Pushpa Padiyar, Amit Panwar, Dharmpal Panchar, Mukesh Dhanai, OP Uniyal, etc.