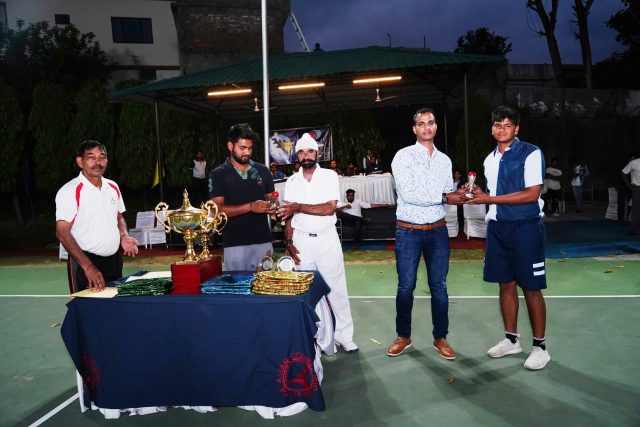 Dehradun, 1 May: MNSS, Rai, beat KV, ITBP, 75 – 69, to claim the 8th Asian Challenge All India Basketball Tournament, here, at The Asian School, today.
A total of 10 teams participated in this 4 day-long event played in the league cum knockout format which commenced on 28 April.
Earlier, in the semifinal, KV ITBP, Dehradun, beat Holy Public School, Agra 55 – 45, while MNSS, Rai, defeated TAS – A, 66 – 62, in an evenly contested match.
Riaz Uddin was the Chief Guest on the occasion. The most awaited final started at 5:30 p.m. with spectators eager for some spectacular netting. In the first quarter, the score was 14 – 27. The second quarter saw the teams struggling to basket and MNSS, Rai, led with a score of 12 – 11. In the third quarter, MNSS continued to lead with the score 23 – 13. The last quarter saw some tremendous netting by MNSS, taking it to victory, scoring 26 – 18, with an overall score of 75 – 69.
Yash Sharma of MNSS, Rai, was adjudged the Best Player. Ansh Saini of The Asian School was declared the Most Promising Player of the Tournament. The Best Shooter was Priyanshu Chand of KV ITBP, Dehradun.
Chief Guest Riaz Uddin, an international player, currently in the professional ONGC basketball team, gave away the trophies.
The prominent persons present on the occasion were Vice President of The Asian School, Madanjeet Singh Juneja, Principal AK Das, Director Gaganjyot Singh Juneja, Director, Academics, Anant VD Thapliyal, Head, Middle School, Mukesh Nangia, Headmistress Kalpana Grover, coaches of participating schools, the officiating referees, the staff and students of The Asian School.
The evening came to a close with the vote of thanks proposed by Aditi Singh, Captain of the Girls’ Basketball Team, The Asian School.