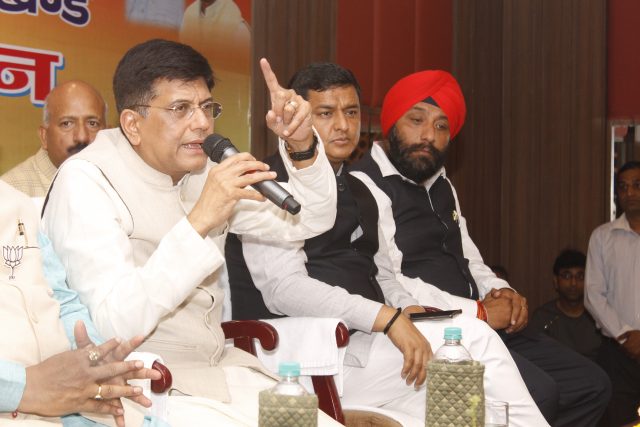 Dehradun, 9 Apr: Union Minister Piyush Goyal today claimed that the BJP Government led by Prime Minister Narendra Modi had delivered on its promises made in the last manifesto. Speaking informally to media persons after addressing a gathering of intellectuals at a local hotel here, today, Goyal claimed that promises made by the Modi Government for 2019 polls were achievable. He added that the performance of the Modi Government in the past five years showed that the Government was extremely focussed on good governance and would be fulfilling the promises made in its manifesto for 2019 General Elections and that the promises made in the manifesto were not hollow.
Goyal claimed that from an underdeveloped economy and being a country which did not have a strong voice globally, India had now become the fastest growing economy for the first time for five years. The work done by the government during the last five years had directly touched every section of society, including 22 crore underprivileged persons, very positively. More than 1.5 crore houses had been constructed for the homeless during the past 5 years under the Pradhan Mantri Awaas Yojana, while 10 crore toilets had been constructed, which had given great relief to the women who had to wait for the dark to go out to relieve themselves, earlier. He reminded that there were only 13 crore LPG connections till 2014, but the Modi Government had granted over 12 crore LPG connections in five years and, of them, 7 crore connections had been given free to the poor under the Ujjwala Yojana. The government’s focus was on infrastructure and access to basic amenities for everyone. Rural power supply too had been improved tremendously. The minister also claimed the country had taken major strides in food security and rural electrification. As many as 18,452 villages were un-electrified when Modi took over as PM, but within five years, all remaining villages had been electrified. From a power deficient country, India had become power surplus and the government was now targeting making it a 24 hour power supply country for everyone in the country. He admitted that the power infrastructure needed overhaul despite being a power surplus country, but added that the government was committed to this and would spend over Rs 27 lakh crores and completely overhaul the power supply infrastructure. The BJP leader claimed that the government had managed to keep inflation down and probably for the first time ever in the country, inflation was below 2.5 percent! He added that low inflation had resulted in big relief to the middle class and the poor as they spent a significant portion of their income on items of daily consumption. He alleged that inflation was always high whenever Congress was in power, but it had been controlled effectively earlier by the then Atal Bihari Vajpayee Government and now the Narendra Modi Government. The current government was the most fiscally prudent government ever and it had managed to keep the fiscal deficit as well as the current account deficit tightly under control.