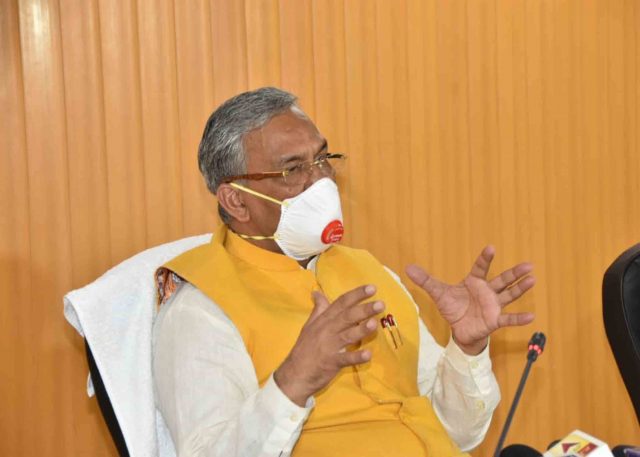 By OUR STAFF REPORTER
Dehradun, 24 Sep: Addressing a press conference at the Media Centre in the Secretariat, today, Chief Minister Trivendra Singh Rawat claimed that the Narendra Modi Government at the Centre was the most pro-farmer in its policies. The agri bills passed in Parliament would bring about revolutionary improvement in farmers’ conditions. It would be possible now for the farmers to get the best prices for their produce, cutting out the monopoly of the middle-men. Profits would now accrue to the farmers as they would connect directly to the market.
Pointing out that some persons were attempting to mislead and instigate through lies, which was why the farmers needed to understand the provisions of the new legislation. He recalled that Prime Minister had a long record of pro-farmer policies, from the time he was Chief Minister of Gujarat. The villagers, poor and farmers have always been his first priority. The Agriculture Ministry had a budgetof Rs 12,000 crore during the UPA years, which had been enhanced to Rs 1.34 lakh crores at the present. No other government had spent as much as Rs 75,000 crores for farmers in a year, but this was made possible by the Modi Government. The PM Kisan Yojana had seen direct transfer of Rs 92,000 crores to farmers’ accounts. Similarly, Rs 1 lakh crore had been allocated for development of agriculture infrastructure. Loans for farmers had gone up from Rs 8 lakh crore to Rs 15 lakh crore. The Swaminathan Committee report recommendations had also been implemented with other reforms.
The CM also mentioned in detail the significant increases in Minimum Support Prices for various crops.
The latest reform provided farmers a double option. They could sell at the mandis to obtain MSP, or they could sell in the open market for higher prices, as also obtain technological advances. This would free the farmers from the hold of middle-men.