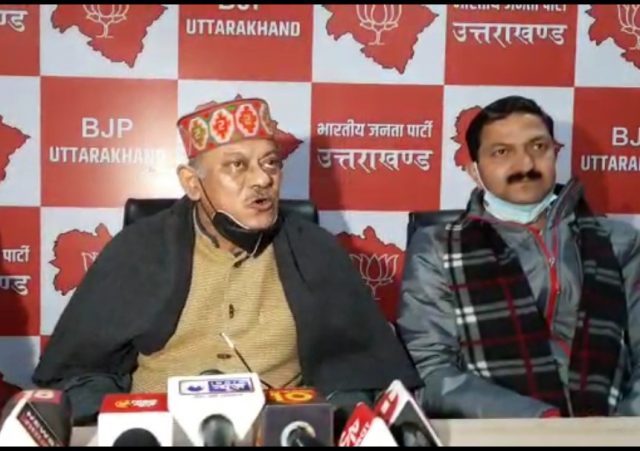 DEHRADUN, 22 Jan: Late CDS General Bipin Rawat’s brother and recently retired Colonel (Retd) Vijay Rawat, who joined BJP, today said in an informal conversation with reporters that he had come to the party after being influenced by PM Modi’s leadership and BJP’s nationalist ideology. He told that he was unable to work in the society for a long time due to health reasons, but now he was ready to serve the people of the state and the country through politics. Colonel Rawat said that under the leadership of Modi, the Central Government had done remarkable work for the honour of the Indian Army. Whether it was a matter of getting the benefits of one rank one pension pending for decades, or the issue of providing new equipment for the modernisation of the Indian Army, in which along with modern technology, state-of-the-art aircraft like Rafale were handed over to the army. Col Rawat claimed that Modi understood the need of the soldiers stationed on the borders of the country and equipped them with the latest equipment. He said that there was a time when the army officers had to look towards Delhi even to answer the enemy immediately on the border, but now they had got full right to give a befitting reply. Giving equal rights to women in the army, Modi had also increased the recruitment of women with permanent commission. He said that Uttarakhand was surrounded by two bordering countries. In such a situation, a network of roads was being laid under the Bharatmala project to strengthen its borders. Atal Bihari Vajpayee’s government started the work of giving due respect to the martyrs in the country from the time of Kargil war. Rawat urged the exservicemen and military families of the state and the people of Uttarakhand to ensure that the good work done that Prime Minister Modi in respect of the defence of the soldiers and the country, continued unabated. Therefore, it was the need of the hour that in order to give development, security and prosperity to the state, to help the Bharatiya Janata Party to win maximum number of votes in the elections. State BJP spokesperson Suresh Joshi, Badri Kedar Temple Committee President Ajayendra Ajay, Rajiv Talwar, Ajit Negi, Harish Chamoli and many other BJP officials were present on the occasion.