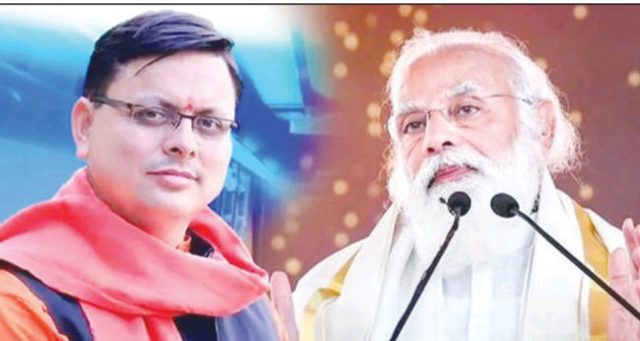 By Arun Pratap Singh
Dehradun, 2 Oct: After Union Defence Minister Rajnath Singh, who had termed Chief Minister Pushkar Singh Dhami, a slog over batsman who was batting well, it was now the turn of none other than Prime Minister Narendra Modi to praise Dhami.  Modi called Dhami a hardworking person and emphasised that Uttarakhand was doing well in respect of many things, especially in vaccination drive.
The occasion was Gandhi Jayanti. Prime Minister Narendra Modi was holding an interaction on “Jal Jeevan Samvad” with different Gram Panchayats, Jal Samiti and Sarpanches across the country between 10 am and 12 noon, when he praised the good work done by the Uttarakhand Government. In fact, yesterday while Modi had a direct dialogue with  Kaushalya Devi,  President Pani Samiti of Mussoorie’s Kyarkuli Bhatta village and also with the villagers, he had also patted Dhami for doing better work in Uttarakhand in the field of vaccination.
On the occasion of Mahatma Gandhi Jayanti today, the Prime Minister launched the Jal Jeevan Mission app. During this he also launched the Jal Jeevan Kosh (National Water Fund). He also interacted with the beneficiaries of Jal Jeevan Mission during this period. PM Modi interacted with the beneficiaries of Jal Jeevan Mission in five states of the country namely Uttarakhand, Uttar Pradesh, Tamil Nadu, Manipur and Gujarat. During this, PM Modi also interacted with water committees and village panchayats. It was during this interaction that he called Dhami a hardworking person.
Political pundits see this praise of Dhami by Modi as an indication that Dhami would clearly be the Chief Minister’s face in the upcoming state assembly elections in Uttarakhand. They assert that the party realises that since Dhami has taken over as CM, the party’s image has been on an upswing once again, and that the people were appreciating Dhami’s people centric approach and his hard work towards ensuring better delivery of government schemes and projects including the vaccination drive.