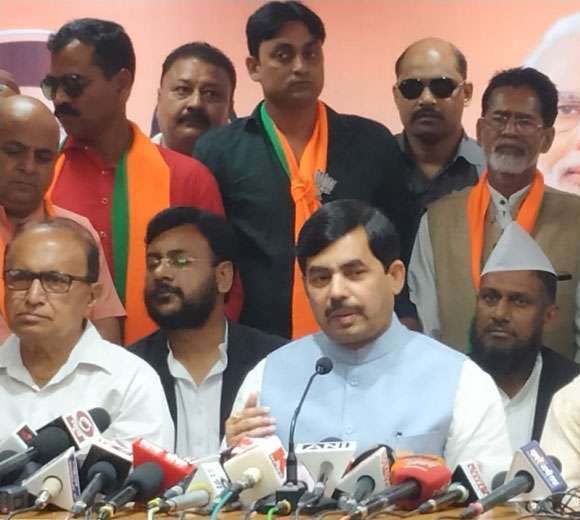 By OUR STAFF REPORTER
Dehradun, 7 Apr: National Spokesperson of the BJP Shahnawaz Hussain said here today that, in the last General Election, there was a Modi wave, but this time, it would be Tsunami. There would be no trace left of the Congress. The BJP would score high even in states where it traditionally got fewer seats. The party would get more than 73 seats in UP. He targeted Congress President Rahul Gandhi for being so scared as to contest from two seats.
Addressing a press conference at the BJP State Headquarters on Balbir Road, here, Hussain said the party’s star campaigners were working all over the country, which would result in a better result this time. He reiterated PM Modi’s mention of Uttarakhand as the Sainik Dham. He expressed confidence that the party would win all five seats in the state.
The BJP leader said that the Congress was now so frustrated at the prospect of defeat that its representatives had begun to indulge in violence in television talk shows. Rahul had run away from Amethi to Wayanad. He declared that Uttarakhand has as much affection for PM Modi as did the people of Varanasi and Gujarat. He recalled how he had predicted victory in the 2017 assembly elections. He was, once again predicting that BJP would get 400 seats in the general elections.
Hussain also advised Rahul Gandhi not to be concerned about how BJP treated its elders, like LK Advani. Present at the press conference were Acting State President Naresh Bansal, State VP Jyoti Prasad Gairola, State Media Coordinator Dr Devendra Bhasin, State Spokesperson Virendra Bisht, Vinay Ruhella, Shadab Shams, Aditya Kumar, Major Qadir Hussain, etc.
On the occasion, RJD State President Islamuddin Ansari joined the BJP. He was welcomed by Naresh Bansal and others.

Garhwal Post has established itself as a credible, balanced and forward looking newspaper in India. Based in Uttarakhand, the daily is read by the aware, socially and culturally responsible, high-income elite of society.
Contact us: info@garhwalpost.in
https://garhwalpost.in/websites-like-megapersonal/