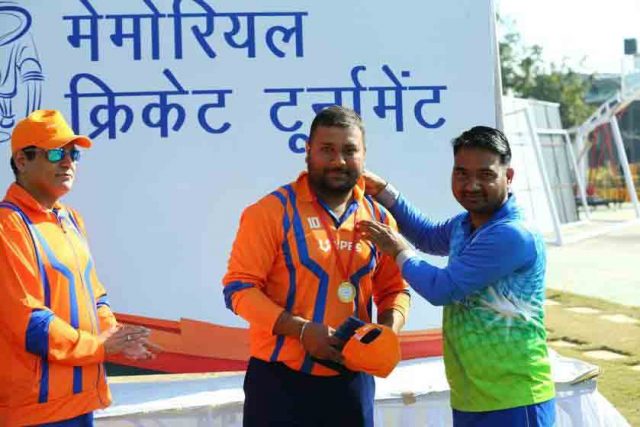 By Our Staff Reporter
December 26, 2020: In the on-going 7th Shaheed Memorial T-20 cricket tournament, UPES team won today’s match against the Jal Sansthan team by 8 wickets. Mohit Miyan was declared the Man of the Match. He scored 84 runs and took 3 wickets. Mohit was the man of the match in the previous match as well between UPES and Sales Tax HQ , played on December 24.
Jal Santhan won the toss and elected to bat first. UPES team restricted them to 150 runs. Only Pradeep Tomar could face the brilliant bowing attack from UPES. He scored 75 runs from 54 balls.
•Mohit Miyan took 3 wickets, Manish Madaan and Sanjay Gusain took 2 wickets each.
The opening batsmen from UPES were, Gaurav Taneja and Mohit Miyan.
•Mohit Miyan and Gaurav Taneja shared the longest partnership of 109 runs in 59 balls.
Miyan scored the highest runs: 84 runs that included 8 sixes and 8 fours in 25 balls.
Gaurav Taneja with 25 runs, 2 boundaries and 1 six in 34 balls was not out.
Atri Nautiyal  captained the UPES team. Sharad Mehra was the Assistant Manager and Coach. Manish Yagnik was the Assistant Manager and Assistant Coach.
The next UPES match is with Transport Department on December 28.
The 7th edition of this tournament is being organized in the memory of Shaheed Lance Naik Pradeep Singh Rawat from ‘4 Garhwal Rifles’. The final match of the tournament is scheduled on 11th January 2021 where the Martyr’s family will be present & honoured as ‘Chief Guest’ and beneficiary of UPES homage to Shaheed Lance Naik Pradeep Singh Rawat.

Garhwal Post has established itself as a credible, balanced and forward looking newspaper in India. Based in Uttarakhand, the daily is read by the aware, socially and culturally responsible, high-income elite of society.
Contact us: info@garhwalpost.in
dating profile for love island ladies searching for serious relationship