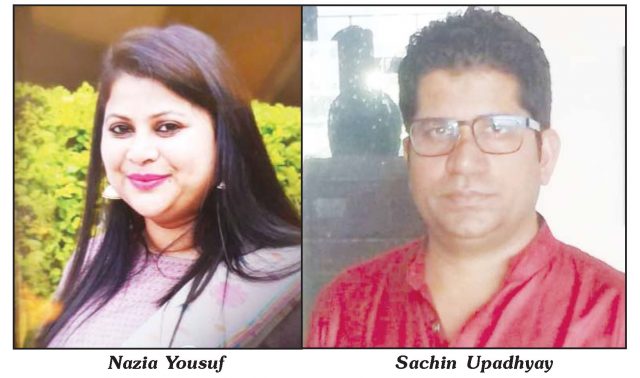 DEHRADUN, 17 Feb: More trouble is looming over WIC owner, Sachin Upadhyay and his wife, who are already facing several criminal charges. While Sachin Upadhyay is already under judicial custody, his wife and partner in his business enterprises, Nazia Yousuf, is at the moment absconding, in an obvious attempt to escape arrest. Sources in the Police claim that had Dehradun Police been a little more proactive, Nazia Yousuf would also have been behind the bars. In fact, when the Dehradun Police arrested Sachin Upadhyay who is incidentally, the brother of senior Congress leader Kishore Upadhyay “outside” his own house, Police did not take any interest to arrest Yousuf. In fact, speaking to Garhwal Post then, Rajpur Police had evaded a direct response to the question if Nazia Yousuf would also be arrested or not. It was only after Delhi Police came to Dehradun and raided some of the properties owned by the couple in connection with different cases filed in Delhi that Dehradun Police started looking for her, and after ‘not finding’ her, declared her to be a fugitive. It may be recalled that there are serious charges of fraud against the couple. Now after much persuasion by the victims, investigation against the couple has made some headway. In one case, one of the ex-partners of Sachin Upadhyay and Nazia Yousuf, Mukesh Joshi has levelled serious charges of fraud and land grabbing against them. Joshi had claimed that he and Upadhyaya were partners in business but Upadhyaya and his wife cheated him by using his counterfeit signatures to grab his property. Later when Joshi filed a case against him in a Delhi court, Upadhyaya entered into an agreement with him, agreeing to pay him back and even mortgaged one of his local properties with him (Joshi). However, it was found that the property in question had been mortgaged to a bank against another heavy loan from Punjab National Bank amounting to Rs 34 crores. When confronted, Upadhyaya allegedly refused to pay Joshi back, who then filed a complaint with Dehradun Police in 2017. The Police had been so reluctant to take the case to its logical end that soon after the case was registered, the Police filed a final closure in the case in December, 2017 claiming that the complainant was not cooperating in the case! That this was a false claim is reflected from the fact that it was challenged in the court of ADJ-III by the complainant Mukesh Joshi. The Court had on 27 April, nullified the final closure report of the Police, much to the embarrassment of the Police. When the Police refused to carry the case to its logical conclusion, Joshi had to file a case with the District Court in Dehradun. Consequently, SIT was formed which too failed to take the case to its logical end. It was only after Chief Minister Trivendra Singh Rawat’s intervention that some headway was made, that too because of the pressures of the court. It was only after the court ordered arrest warrant because the Upadhyays paid no heed to the summons that Sachin Upadhyay was picked up from outside his house but still the Police did not appear to be interested in arresting Nazia Yousuf. Delhi Police, which had just days before raided several properties of Sachin Upadhyay had come armed with search warrant from a Delhi Court which left Dehradun Police with no option but to cooperate with the Delhi Police team headed by Inspector Ashwini Kumar of the Economic Criminal Branch of the Delhi Police. Delhi Police has a case against Sachin under sections 420, 406, 467, 468, 471 and 120B. Sachin is accused of grabbing the company by forging the signature of the partner and renaming it in the name of wife Nazia Yusuf. Nazia and others who have been named in this case include one Chartered Accountant from Delhi. Now that investigations have begun in right earnest against the accused, sources hope that some other inquiries were also likely against them. There are several other complaints pending against the couple including one filed by Rajendra Nautiyal whose property has been taken on lease by Upadhyay and allegedly grabbed now. Besides this, it also needs to be looked into how a club was still being operated on a property which had on papers been sealed by MDDA for violation of rules and illegal construction.