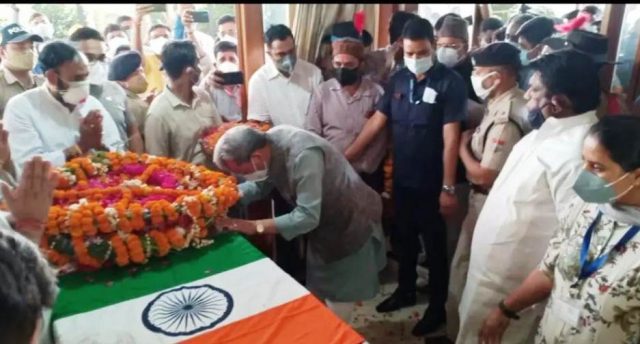 By Our Staff Reporter
Dehradun, 14 Jun: The mortal remains of senior Congress leader and Leader of the Opposition, Dr Indira Hridayesh were cremated with state honours in Haldwani, today, in the presence of Chief Minister Tirath Singh Rawat and senior politicians from all the parties. The pyre was lit by her son Sumit Hridayesh at the ghat located in Ranibagh Chitrashila. The last rites of the late leader were performed with full state honours.
It may be recalled that Indira Hridayesh had passed away yesterday morning in New Delhi where she had gone to attend some party meetings.
During the last rites, a large number of office bearers and workers of all parties including former Chief Minister Harish Rawat, Cabinet Minister Bansidhar Bhagat, Education Minister Arvind Pandey were present. Before this, the last yatra was taken out from Swaraj Ashram located in Matargali. During the procession, people on the way paid their tribute to one of the senior most political leaders of Uttarakhand with moist eyes and with showering flowers on her body.
As soon as the body of Hridayesh was brought from New Delhi to her residence on Nainital Road in Haldwani, last night, crowds had started gathering at her residence despite the Covid restrictions.
Chief Minister Tirath Singh Rawat, Cabinet Ministers Bansidhar Bhagat, Arvind Pandey, Minister of State Rekha Arya, Naveen Dumka and other big leaders were among those who paid their tributes in person, today. During this, the CM said that the personality of Indira Hridayesh was such that she went out of the way and above party politics to help people as well as to advise leaders of all political parties. She fought strongly for the development of Uttarakhand and that her death was a huge and irreparable loss to the state. He added that the state government would make every effort to ensure that her dreams for the development of the state were fulfilled.
Assembly Speaker Prem Chand Aggarwal, BJP State President Madan Kaushik and former PCC Chief Kishore Upadhyay were also present to pay their tribute. Former MP Balraj Passi, BJP Secretary (Organisation) Suresh Bhatt, Congress District President Satish Nainwal, Rahul Chhimwal, a large number of local Congress and BJP leaders also paid their tributes to the departed soul.