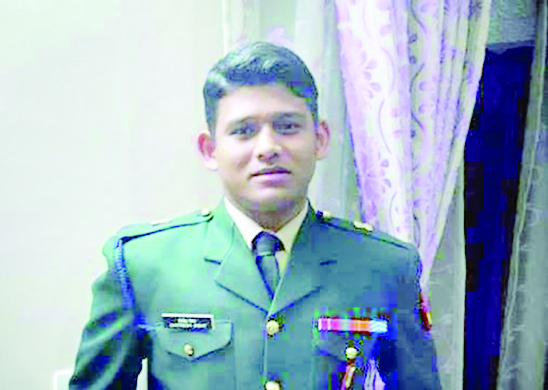 By OUR STAFF REPORTER
DEHRADUN, 17 Feb: The mortal remains of Major Chitresh Bisht, who was martyred while defusing an IED in Rajouri, arrived here, today, at the Jolly Grant Airport. His body was brought from Jammu by an Army aircraft. After presenting a guard of honour, it was taken to the Military Hospital. It will be kept there till 7 a.m., tomorrow, and then brought with full military honours to his home in Nehru Colony.
Governor Baby Rani Maurya and Chief Minister TS Rawat have expressed grief at the martyrdom of Major Bisht.
Originally from Pipli in Almora District, Major Bisht’s family lives in Nehru Colony, here. His father SS Bisht is a retired Police Inspector. Major Bisht was to be married on 7 March and his family was busy with the arrangements when the tragic news arrived.