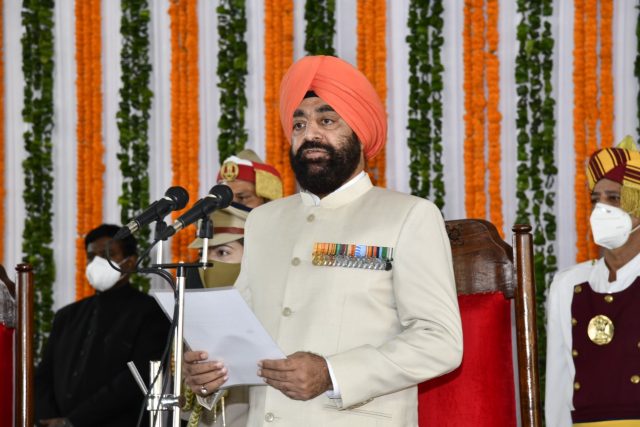 After taking oath, Governor Lt Gen Gurmit Singh inspected a Guard of Honour presented by the 4th Maratha Battalion of the Indian Army. The event was conducted by Chief Secretary Dr SS Sandhu.
Earlier, Chief Secretary Dr Sandhu read out the warrant issued by the President of India, according to which Lt Gen Gurmit Singh has been appointed Governor. 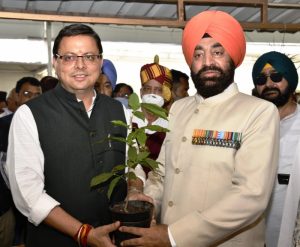 Later, during an informal interaction with the media, Governor Singh talked about his priorities. He said, “Women of the state are self-reliant and courageous. A new chapter of women empowerment can be written in the state by motivating the daughters of the state to join the Sainik Schools and NDA.”
He added that a large number of ex-servicemen, elderly parents and families of soldiers also reside in Uttarakhand. Resolving the problems related to their health, settlement of pension, Ex-Servicemen Contributory Health Scheme (ECHS), etc., would be his priority.
The Governor reminded that Yamunotri, Gangotri, Kedarnath and Badrinath are the Char Dhams of Devbhoomi Uttarakhand; it is the fountainhead of the Ganga and Yamuna. Many other famous pilgrimage sites like Nanakmatta Sahib, Reetha Sahib, Hemkund Sahib are also situated here, making it a sacred land. It would be a privilege to serve this Devbhoomi. He also expressed gratitude of the President and the Prime Minister for giving him the opportunity to serve as the Governor of Uttarakhand.
He also emphasised that Uttarakhand is a treasure of nature. Its beauty is supernatural. Consequently, immense opportunities exist for employment and entrepreneurship, which can be created in the mountains by promoting tourism, tourism based businesses, organic farming, Yoga-Ayurveda, and small industries based on food processing. The current government is making good efforts in this direction; the state government will always have all possible support in this regard.
Governor Singh pointed out that times are changing rapidly in the age of technology. The state has two international borders. Therefore, connectivity, bridges, roads, tunnel connectivity are also important. Over time, a new chapter of development and progress would be written.
He paid tribute to the brave sons of Uttarakhand, the first Param Vir Chakra winner Major Somnath Sharma and Param Vir Chakra winner Lt Col Dhan Singh Thapa. He saluted the brave warriors of Uttarakhand who have received 23 Mahavir Chakras, 147 Veer Chakras, 6 Ashok Chakras and 19 Kirti Chakras.
Chief Minister Pushkar Singh Dhami along with other dignitaries and senior officials were present on the occasion.