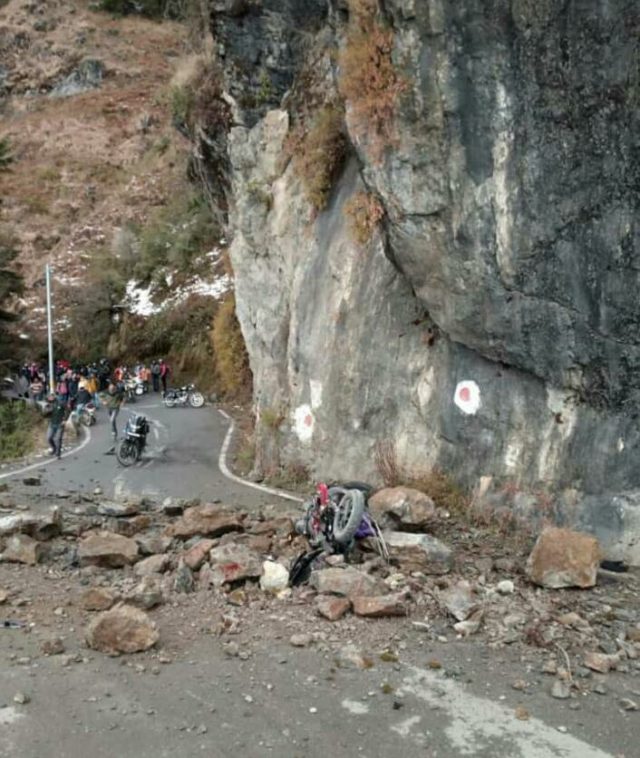 By Our Staff Reporter
Mussoorie, 11 Jan: A motorcyclist died after being hit by a landslide on the Dhanaulti-Mussoorie road, today. The accident happened near Kotli village. Another youth was seriously injured in this accident, who was admitted to Landour Community Health Centre, where doctors referred him to a higher centre after first aid.
Mussoorie Police Incharge Girish Chand Sharma said that both the bike riders were going to visit Dhanaulti from Dehradun with their dance group, when a large part of the rock broke away from the hillside near Kotli village, hitting the two.
In this accident, 23-year-old Anuj Singh, son of K Singh, resident of Raipur, Dehradun, died on the spot, while 16-year-old Gaurav, son of Jai Singh, resident of Canal Road, Dehradun, was seriously injured. The injured and the deceased are members of SNS Dance Academy, Dehradun. Eleven youths and 4 girls comprised the group.
Gaurav was admitted to the Landour Community Health Centre in Mussoorie, but seeing his serious condition, the doctors referred him to Dehradun. Girish Chand Sharma said that a large number of tourists are going to Dhanaulti due to snowfall. Tourists are being stopped in Mussoorie due to increasing crowds. Cautionary notice boards have been put up where there is a possibility of falling rocks or stones. He also urged the people to move carefully on the Mussoorie-Dhanaulti road.