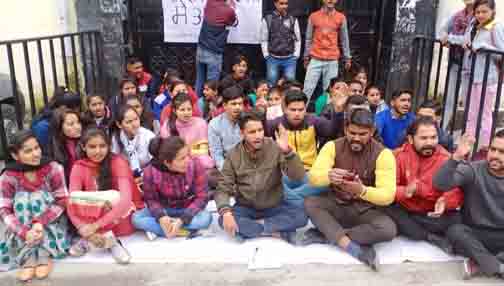 Mussoorie, 14 Nov: MPG College students continued their protest here, today, against the proposed fee hike. Students’ Union President Prince Panwar and other students did not allow the college to open. Seeing the situation getting worse, Mussoorie Police In-charge Bhawna Kainthola reached the college and asked the students to hold their movement in a peaceful manner.
She said the decision to increase the fee had been taken at the central level, so the college management could not do anything about this. She arranged a conversation between Prince Panwar and Mussoorie SDM Varun Chaudhary. Chaudhary promised that, on Friday, he would accept a memorandum addressed to the Union Minister and the State Government. On receiving this assurance, the students continued their agitation in a peaceful manner. Present on the occasion were Anil, Sumit Bhandari, Manish Nautiyal, Jagpal Gusain, Sapna Sharma, Abhilash Rana, Naveen Shah, Nikhil Bahadur, Shubham Rai, Anurag, Ajay, Kajal, Neha, Meghna and Raveena.