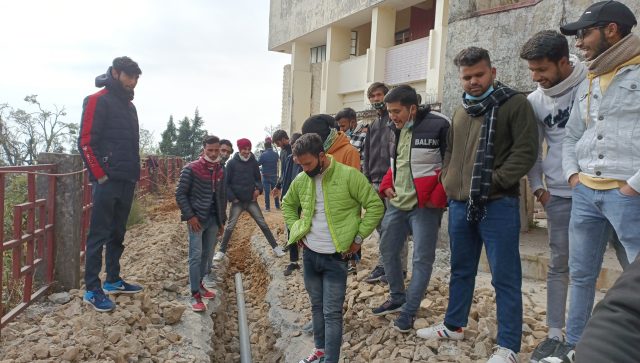 By Our Staff Reporter
Mussoorie, 28 Dec: The MPG College Students’ Union has expressed its objection to the poor quality work done in laying the sewerage line in the college campus. A memorandum was submitted, today, in this regard to Principal Dr Sunil Panwar.
Student Union President Prince Panwar said that the condition of the College is going from bad to worse. The managing committee was failing to take action. Question marks are being raised on the quality, while the lines of public toilets are being connected with the lines of the college, which is wrong.
He said that the number of college students would increase in the coming time and any plan should be far-sighted. The condition of many buildings of the college was deteriorating and these required renovation. This was also being ignored. He said that, soon, a delegation of students would meet the Chairman, who is also the Municipal President, and apprise him of the problems faced by the college.
Principal Dr Sunil Panwar said that the students have raised many questions regarding the ongoing sewerage work in the college and these would be taken up with the contractor. The work had been stopped for the time being and no college sewer line would be allowed to be connected to any public toilet.
Present on this occasion were Akash Panwar, Rohan Rana, Rishabh Panwar, Aman Kaintura, Rohit Kaintura, Anil Panwar, Anil Rana and others.