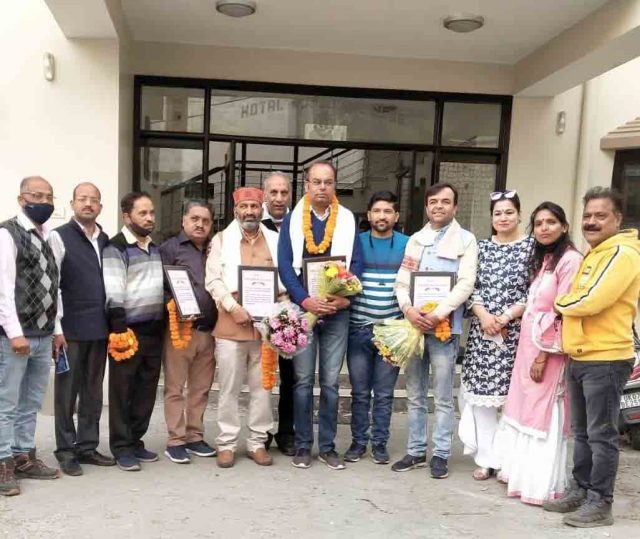 Mussoorie, 15 Apr: The newly elected office bearers of the Mussoorie Traders’ and Welfare Association were felicitated by Goonj social organization with flower bouquets and shawls, here, today. They were urged to work in the interest of traders and the development of Mussoorie.
At a felicitation ceremony held at a local hotel, the President of Goonj, Dr Sonia Anand Rawat, honoured Association President Rajat Aggarwal, General Secretary Jagjit Kukreja, Treasurer Nagendra Uniyal with bouquets and mementos.
Dr Rawat said she was working to help people in the social sector, especially the poor and the needy. She said that acute shortage of drinking water is being observed at 12 Kainchi Road for the past one week. With the help of Mussoorie Traders and Welfare Association she would provide drinking water via 10 tankers so that the problem could be overcome for some time. The officials of Garhwal Jal Sansthan would soon be consulted to resolve the problems faced by the people.
She alleged that Municipal Chairman Anuj Gupta was not concerned about the problems being faced by the people of Mussoorie. She said that the chairman had forgotten the public interest.
Rajat Aggarwal said that he had become President for the seventh time with the support of traders of Mussoorie and he would try to meet the expectations of the people. He said that the Chief Minister had announced that slum dwellers of the state would be given ownership of their homes, but unfortunately Municipal Chairman Gupta was talking about demolishing the slums. Among those present were Satish Juneja, Anil Kumar Gupta, Salim Ahmed, Mahimanand, Sandeep Aggarwal, Shiv Arora, Puran Juyal, Sunil Goyal, Jack Jaffrey, Bhavana Goswami, Manoj Aggarwal, Neetu Garg, Lata Joshi, Sasikala, Mamta Rao and many others.