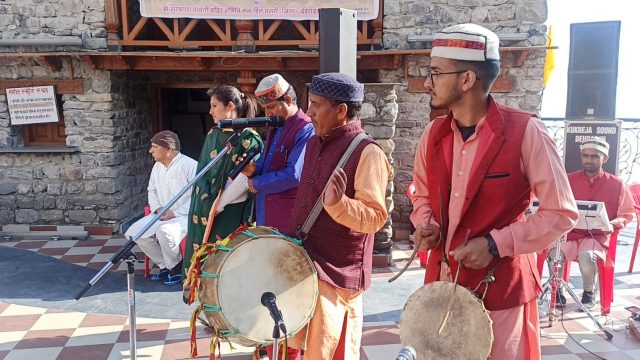 Mussoorie, 8 Nov: Under the aegis of the Uttarakhand Tourism and Pilgrimage Protection Committee musical and other performances were organised at the martyrs’ memorial here, today, on the eve of State Formation Day.
A Rudra Mahayagya and Shanti Paath were held and the Doli of Maa Surkanda Devi was also displayed, with devotees taking her blessings. Tourists also enjoyed Garhwali and Kumaoni songs along with the folk culture. Kamal Bhandari, President of the Uttarakhand Tourism and Pilgrimage Protection Committee, said that programmes are being organised by the organisation on the eve of formation day with limited resources. Artists from all over the state participated, while spreading the glory of their folk culture. Kamal Bhandari regretted that they had not got any cooperation from the municipal administration and public representatives. he said that they have given grants regarding the foundation day of the municipality president Anuj Gupta. He alleged that the municipality did not have funds for such events but had enough for corruption. Unnecessary works were being undertaken even as there was only one toilet near the martyr’s memorial, which was demolished by the administration.