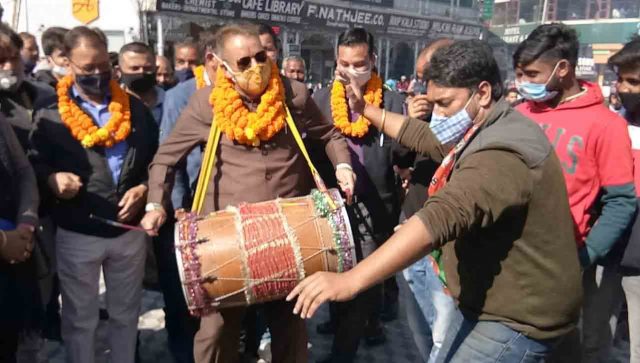 By Our Staff Reporter
Mussoorie, 11 Nov: BJP workers in Mussoorie, after the victory of NDA and BJP candidates in Bihar and elsewhere, gathered at Gandhi Chowk here, today, under the leadership of Mussoorie MLA Ganesh Joshi and celebrated with the beating of drums and distribution of sweets. MLA Joshi danced with others on the occasion. Joshi said that, with Modi much was possible. The way in which the country is constantly developing had resulted in the candidates of the BJP winning all the elections.
He expressed confidence that, in 2022, BJP would again form a government in Uttarakhand with a full majority under the leadership of Chief Minister Trivendra Singh Rawat in Uttarakhand.
Among those present on this occasion were Dehradun District Panchayat Vice President Deepak Pundir, BJP Mussoorie President Mohan Petwal, Kushal Rana, Councilor Madan Mohan Sharma, Arvind Semwal, Cantonment Council Vice President Badal Prakash, Pushpa Padiyar, Narendra Padiyar, Amit Bhatt, Dharampal Panwar, Sapna Sharma, Anil Singh, Kunal, Naresh Anand, Gambhir Panwar, Ramesh Khanduri, Mukesh Dhanai, Manoj Kharola and many others.