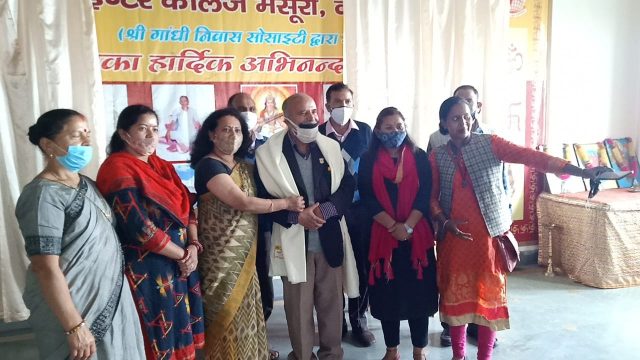 By Sunil Sonker
Mussoorie, 25 Jun: A seminar was organised by workers of the BJP in the auditorium of Mahatma Yogeshwar Shishu Mandir here, today, to observe the imposition of emergency in the country by former Prime Minister Indira Gandhi as ‘Black Day’. Nominated member Madan Mohan Sharma expressed his views regarding the Emergency. Earlier, Madan Mohan Sharma was felicitated by the BJP Mahila Morcha with a shawl and a bouquet of flowers.
Mussoorie BJP President Mohan Petwal was the Chief Guest. Madan Mohan Sharma and Mohan Petwal said that, every year, 25 June, 1975, is remembered for the imposition of emergency in the country. The BJP has declared it would be observed as Black Day. He recalled the atrocities inflicted on the people during the emergency. The four pillars of democracy were all repressed.
Present on this occasion were Mussoorie BJP President Mohan Petwal, General Secretary Kushal Rana, Mussoorie Mahila Morcha President Pushpa Padiyar, General Secretary Sapna Sharma, Mussoorie BJP Yuva Morcha General Secretary Abhilash, Leela Kandari, Rajeshwari Negi, Sunita Dabral, Narendra Padiyar, Member Arvind Semwal, Gambhir Panwar and others.