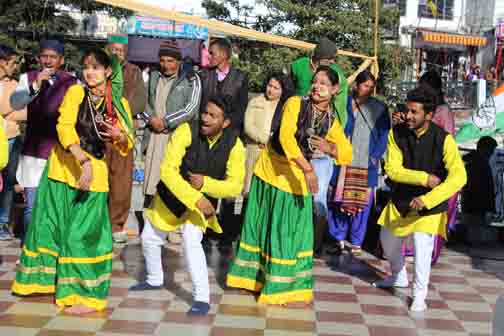 By OUR STAFF REPORTER
Mussoorie, 24 Dec: The late Indramani Badoni, popularly known as ‘Gandhi of Uttarakhand’, was remembered by activists of social organisations with the Director of PB Films, on his birth anniversary, here, today.
At a programme organised at Indramani Badoni Chowk, floral tribute was paid to to his statue. Slogans were raised in his praise. A cultural programme was also held at the Martyrs’ Memorial by a team led by folk singer Padam Gusain and Prerna Bhandari, which enthralled the audience, present. Many tourists were seen dancing to the song, “Bedh Pako, Barah Masa”.
Former MLA Jot Singh Gunsola and Pradeep Bhandari described Badoni as a visionary, who had laid the foundation of a separate statehood movement. Lalit Mohan Kala, a social activist, recalled that Badoni was elected to the UP Assembly from the Devprayag constituency, Pauri Garhwal, in 1969. He was also the Chairperson of the Hill Council and raised the separate hill state issue on various platforms. In 1994, Badoni began a fast in Pauri town, which ignited the statehood movement in others parts of the hill region. “Badoni’s contribution to the separate statehood movement is similar to that of Mahatma Gandhi’s in India’s independence struggle.” They further said that, despite Uttarakhand’s formation, politicians of both the BJP and the Congress had failed to imbibe the principles of Badoni. Had the vision of Veer Chandra Singh Garhwali and Indramani Badoni been followed by the respective state governments, the picture of Uttarakhand would have been different today. Pradeep Bhandari lamented that the state government had not organised any programme to mark the birth anniversary of Badoni. Former CM, Harish Rawat, had declared Badoni’s birthday as cultural day.
Present on the occasion were Anita Saxena, Rajeshwari Rawat, Pushpa Padiyar, Narendra Padiyar, Kamal Bhandari, Roop Chand Sharma, Pooran Juyal and others.

Garhwal Post has established itself as a credible, balanced and forward looking newspaper in India. Based in Uttarakhand, the daily is read by the aware, socially and culturally responsible, high-income elite of society.
Contact us: info@garhwalpost.in
best hookup free date night in provo best dating app 2022