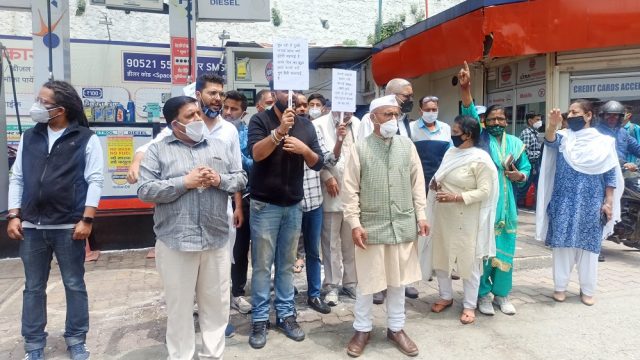 By Sunil Sonker
Mussoorie, 11 Jun: The Congress, today, fiercely attacked the BJP’s central and state governments during a demonstration held at the petrol pumps here to protest against rising inflation in the country.
Congress workers gathered at a petrol pump under the leadership of Mussoorie Congress President Gaurav Agarwal and raised slogans against the BJP governments. The Mussoorie Youth Congress led by Mussoorie President Wasim Khan also held a demonstration at another petrol pump.
Former Mussoorie Congress MLA Jot Singh Gunsola, Mussoorie Congress President Gaurav Aggarwal and Mahila Congress President Jasbeer Kaur said that the BJP has broken the back of the poor people of the country due to the wrong policies of its government. The prices of petrol and diesel were sky high and there had been a huge increase in the price of edible oil. They said that, on one hand, the country is suffering due to the Corona pandemic and, on the other, inflation had made people miserable. They said that today the Modi government was taking advantage of the foundation laid by the Congress. However, it had done no development work on the ground. The promises made by the Modi Government had not been fulfilled till date. Narendra Modi has captured power by making false promises to the people, but in the coming time, people would oust the BJP government.
Also present on the occasion were former Municipal President Manmohan Singh Mall, Tejpal Rauthan, Ramprasad Kavi, Vinod Semwal, Pratap Panwar, Sonia, Santosh Bothyal, Samuel Chandra, Amit Kantura, Mohammad Sarfaraz, Mohammad Shahrukh, Kamil Ali, Siddharth, Abhishek, Monu, Nisha Tamta, Pritam Singh and many others.