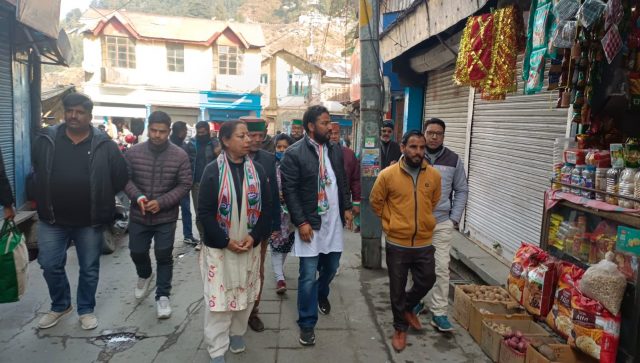 By Our Staff Reporter
Mussoorie, 2 Jan: The Mussoorie unit of the Congress interacted with the people to wish them a Happy New Year. Congress leaders claimed on the occasion that 2022 would belong to the party in Uttarakhand. Under the leadership of former Chief Minister Harish Rawat, Leader of the Opposition Pritam Singh and Congress State President Ganesh Godiyal, the party would form the government with an absolute majority.
They said that the BJP had changed its Chief Ministers during its 5 year term and misled people with its ‘jumlebaazi’. In view of the elections, the BJP government and Chief Minister Pushkar Singh Dhami were laying foundation stones and making announcements, even though the state does not have money. Even the central government is doing the same. They claimed that the people of the state have understood everything and would teach a lesson to the BJP.
Present on this occasion were Congress leader Sushant Bora, former MLA Jot Singh Gunsola, former municipal president Manmohan Singh Mall, Mussoorie Congress President Gaurav Agarwal, Mahila Congress president Jasbir Kaur, NSUI Mussoorie president Jagpal Gusai, councilor Nandlal Sonkar, Pratap Panwar, Darshan Rawat, Kuldeep Rauchela, Saurav Sonkar, Abhishek, Shivani Bharti, Sushil Agarwal, Shahrukh Khan, Naveen Shah and others.