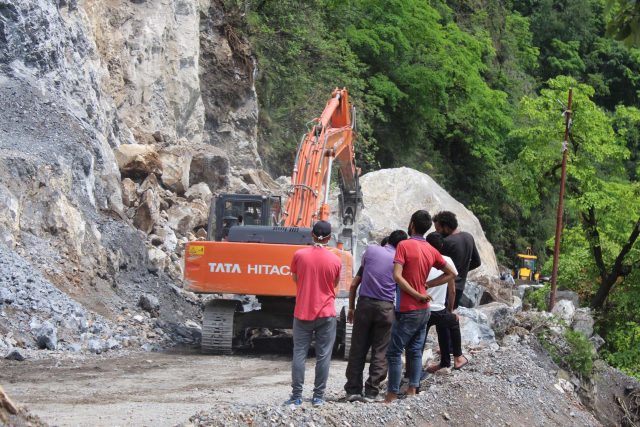 MUSSOORIE, 21 Jun: The Mussoorie Dehradun road was blocked, today, as a large part of the hill side near the Galogi Power House slid down. Due to this, long queues of vehicles were seen on both sides of the road. As widening work on the Mussoorie Dehradun road is underway these days, work on cutting into the hill side was being done. Heavy machinery has been installed by the Public Works Department to clear the road, but it was taking time to cut through the slide. In view of the time taken to open the road, the traffic was diverted on to the Hathipaon LKD Road.
It is being said that due to the anticipation of the contractor carrying out the widening work, a major accident was averted by halting movement of vehicles and removing the earth moving machinery in time. Contractor Mohan Melwan disclosed that work was being done under the Public Works Department. On Sunday morning, his workers told him that stones were falling from the hill. He reached the spot and saw that a large part of the hill side was collapsing. He stopped all vehicles and removed his machines. After some time, a large part of the hillside collapsed, damaging a section of the road. Some trees were also damaged.
PWD Assistant Engineer Sansar Singh said that, to operate Volvo buses to Mussoorie, the Mussoorie Dehradun road is being widened at a cost of Rs 4 crores. An 108 Ambulance also got stuck due to the closure of the Mussoorie Dehradun road which was transporting a person injured in a bike accident in Purola area. He was referred to Dehradun as his condition was critical. After an hour, after media’s intervention, the patient was taken to Dehradun via the LKD Hathipaon Road.