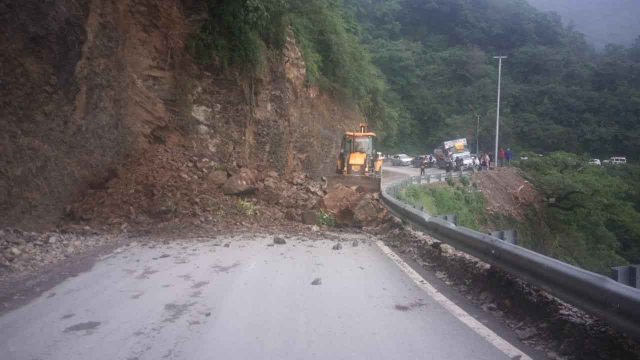 By Our Staff Reporter
Mussoorie, 27 Jul: The Mussoorie Dehradun Road was obstructed today after heavy landslides near Kolhukhet.
After the closure of the road, there was a long queue of vehicles on both sides, due to which the tourists had to face heavy problems, along with the local people. After the closure of the road, the officials and staff of the Mussoorie Police and Public Works Department reached the spot and a JCB was put to removing the debris on the road. It could be opened after about two hours.
It may be noted that the mountainside is being cut to widen the road from Galogi Power House to Kolhukhet, where landslides are constantly happening. In the last one month, the Mussoorie Dehradun Road has been closed 5 times around Kolhukhet due to which people are facing a lot of problems.
Assistant Engineer, Public Works Department, Sansar Singh said that in order to bring Volvo buses to Mussoorie, in the last few days many diversions of Mussoorie Dehradun road are being cut and widened on the hills sides. In such a situation, debris is falling from the mountain when it rains. JCBs have been deployed by the department on both ends of the road. The debris is being removed after the landslides.