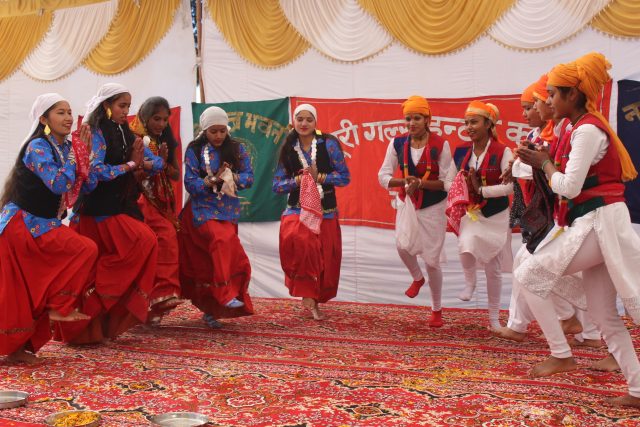 Mussoorie, 22 Dec: The Annual Day of Mussoorie Girls Inter College ended with an enchanting presentation of cultural programmes and prize distribution, here, today. At the same time, awards were presented to the brightest students of the college, including girls and sportspersons who came first in sports, cultural, science, geology, etc.
On the occasion, the girls presented Garhwali, Himachali and other folk dances which enthralled the audience. The students also displayed amazing Karate stunts. Exhibitions of Science, Art, Crafts and Computer Science captivated the minds of visitors.
Mussoorie BJP President Mohan Petwal and former municipal chairman OP Uniyal praised the work underway at the school on imparting good education despite limited resources. They said that the way the students of the school topped in education, sports, NCC, NSS and cultural activities deserved praise for the school management, principal and teachers. They expressed concern at the deteriorating condition of the school’s building and said that MLA Ganesh Joshi was working on renovation of the school. A volleyball ground was under construction in the school. They praised the school for its talent in other activities while maintaining the academic atmosphere.
Principal Anita Dabral said that despite the limited resources, the school was doing better than others in the field of education. She said that due to the efforts of the managing committee, the school provided education to the children of Mussoorie and surrounding areas with development of physical and intellectual abilities. With the cooperation of MLA Ganesh Joshi, an indoor playground was being constructed in the school, which would benefit the girl students.
Present on the occasion were Narendra Sahni, Lalit Mohan Kala, Abha Shaili, Manoj Shaily, Geeta Kumai, Jashoda Sharma, Darshan Rawat, Kuldeep Rauchhela, DK Jain, Sunil Goyal, Manoranjan Tripathi and many others.