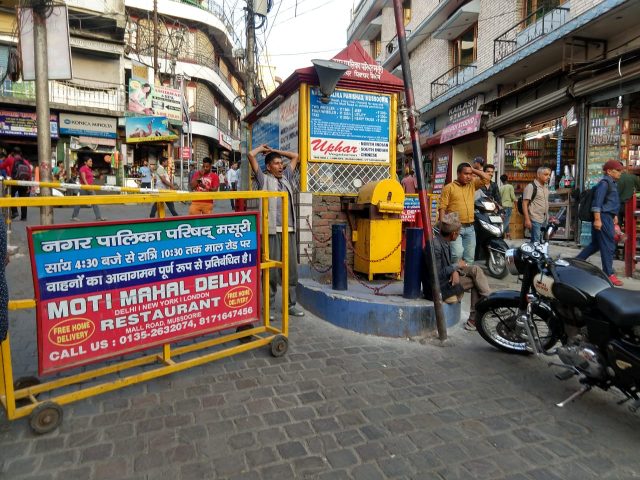 By Swagata Rana
Mussoorie, 23 Jun: The oldest residents of Mussoorie’s iconic Mall Road are currently facing severe problems as the entry/exit barriers on the Mall Road, in force from March to November, each year, have made their lives difficult by creating a significant number of issues directly affecting their daily household chores and right to livelihood.
The rationale behind imposition of arbitrary traffic rules stems from the fact that in order to regulate traffic on the Mall Road during peak season time (May to August) and also, during non-season time, the authorities of the Nagar Palika Parishad have been regularly impeding vehicular traffic inflow and outflow to and from both ends of the Mall Road, i.e. Library Chowk and Picture Palace. Moreover, between 4:30 p.m. and 10:30 p.m., there is a complete ban on any vehicular entry on the Mall Road with no exceptions even for the local residents of the Mall Road area. It is pertinent to mention that while such imposition of regulations on tourists are understandable, it is the local residents of the Mall Road who end up bearing the brunt, as for them, the time period between 4:30 p.m. and 10:30 p.m. brings with it a whole set of adversities which includes creation of difficulties in commuting to and from their own homes/residences, on their own vehicles.
Further, the difficulties of the Toll Barrier Entry/Exit also extend to students who return home from colleges, traders who return home from their shops, and working professionals who return from their offices located in different parts of the Dehradun District, as they are compelled to leave their cars parked outside theMall Road Entry Barrier if they miss out on the Entry timings, despite their legal residences or the path leading to their own homes being very much on or through the Mall Road.
The dilemma of the local residents does not end here. They are also the victims of favouritism and bias which openly favours the present/ex-employees of the Nagar Palika Parishad and their family members, who are allowed to enter and exit the Toll Booths at their own whims and fancies, while the common person or, more appropriately, the local common person belonging to Mall Road ends up on the losing side with frugal or no benefits at all at their disposal, even during times of crisis or medical emergencies.
The local resident also points out that they pay all the necessary taxes including house tax and others. However, since most of the local residents are not politically or financially influential, they are not able to have their way with the authorities concerned and, hence, face severe issues in executing some of the most basic and routine tasks they set out to accomplish every day. Moreover, since Mussoorie already suffers from a lack of adequate infrastructure in terms of parking space, the poor residents of Mussoorie’s Mall Road are left to make suitable arrangements for their vehicles at their own cost. Therefore, coupled with poor planning and inadequate infrastructure, there is arbitrary decision making which disallows the locals from truly enjoying a proper life, despite being law abiding and long time residents.
In the light of the aforesaid prevailing circumstances, it is difficult to predict when the local residents of the Mall Road would finally be able to live a normal life wherein they are not subjected to arbitrary rules and regulations which affect their basic right to life and dignity.