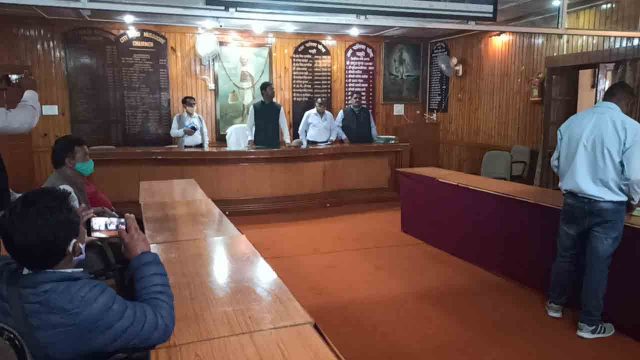 By OUR STAFF REPORTER
Mussoorie, 9 Sep: An emergency board meeting of the Municipal Council was held today but only 3 out of the 13 councilors attended. In the absence of quorum, Municipal Chairman Anuj Gupta adjourned the board meeting. The meeting was held to discuss the land to be provided to government for rehabilitation of Shifan Court evacuees.
It is being said that some of the councilors are not happy with the functioning of the chairman. They believe politics is being done in the whole matter by displacing the poor people.
Palika Chairman Anuj Gupta said that many of the councilors had gone to the funeral ceremony of a senior Congress leader, due to which they couldn’t attend the board meeting.
Bharatiya Janata Party Mussoorie president Mohan Patwal and General Secretary Kushal Rana questioned the functioning of the municipal council. They said that the proposal to rehabilitate the poor should have come earlier. They said MLA Ganesh Joshi is concerned about the victims, but due to non-availability of any kind of land from the municipality, no housing scheme could come up. He has promised to set up tin sheds immediately on the land.

Garhwal Post has established itself as a credible, balanced and forward looking newspaper in India. Based in Uttarakhand, the daily is read by the aware, socially and culturally responsible, high-income elite of society.
Contact us: info@garhwalpost.in
m4m hook ups