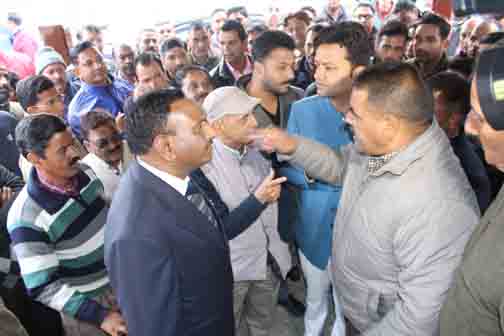 Mussoorie, 2 Dec: Mussoorie Municipal Council employees created a ruckus, today, before the start of the first board meeting of the newly elected president and members. The employees alleged that Executive Officer ML Shah had violated all the rules by allowing an outsider to conduct the oath taking ceremony held in the Municipality auditorium. According to them, it should be conducted by the Executive Officer or a Municipal Employee.

The municipal employees created a disturbance at the main gate and also manhandled the EO. Municipal Council Employees’ Union President Mahaveer Singh Rana said convention had been violated. No respect was given to municipal employees. At the same time the employees demanded immediate removal of the Executive Officer from Mussoorie by the newly-appointed Chairman Anuj Gupta with immediate effect.