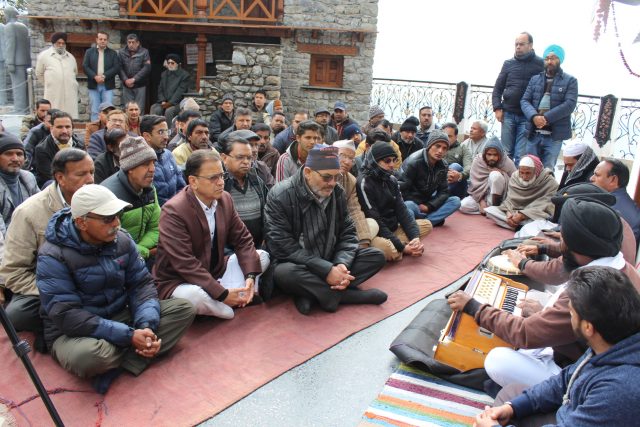 By Sunil Sonker
Mussoorie, 18 Feb: Residents, social activists, politicians and others gathered at Mussoorie Martyrs’ Memorial near Jhulaghar to pay homage to the martyrs who lost their lives in the terror attack at Pulwama and to Major Chitresh Bisht, who lost his life in an IED blast in Rajouri district of Jammu and Kashmir. The multi-faith prayer service was organised by the Mussoorie Traders and Welfare Association.
Resentment was evident against the terrorists and Pakistan among the people, who urged the Union Government to take strict action against them. The markets of the entire town were closed to pay tribute to the martyrs and also to show their anger against Pakistan and the terrorists. The people said it was time to take revenge so that a lesson could be taught to Pakistan. They further said that, if the country needed them to fight on the border, they would happily do so.
Municipal Council Chairman Anuj Gupta said the sacrifice of the martyrs should never be forgotten as it was due to them that the citizens of nation breathed freely. The soldiers worked day and night to protect them. He also asked the Government of India to take strict and immediate action against the terrorists and Pakistan.
President of the Traders’ Union of Mussoorie said, “People have come together to pay homage to the martyrs in every corner of the town. This shows the special respect we have for our soldiers.” He said this terror attack was a warning to the country. There had to be retaliation against the terrorists at the earliest and steps taken to sort out the issues in Kashmir.”
Rajshree Rawat, retired Assistant Commandant of ITBP, said that after the terrorist attack, the entire country was unhappy and everyone had tears in their eyes. Every citizen of the country was ready to teach a lesson to the enemy. Those who had retired from the Army were ready to provide their services. She said that the account of every drops of blood of the martyrs would be taken.”
Former Municipal Chairman OP Uniyal said, “We should join hands together to obtain justice for those who have been killed in the terror attacks. We should strengthen the hands of our Prime Minister to fight against terrorism, so that such attacks are not repeated in the future.”
Among those present on the occasion were former Municipal Chairman Manmohan Singh Mall, Rajat Agarwal, Paramjit Kohli, Jagjit Kukreja, Bhagwan Singh Dhani, Bhagwati Prasad Kukreti, Ravindra Goyal, Suresh Goyal, Masum Ali, Ramprasad Kavi, Sardar Harbhajan Singh, Sunil Panwar, Gambhir Panwar, Ravinder Rawat and many others.