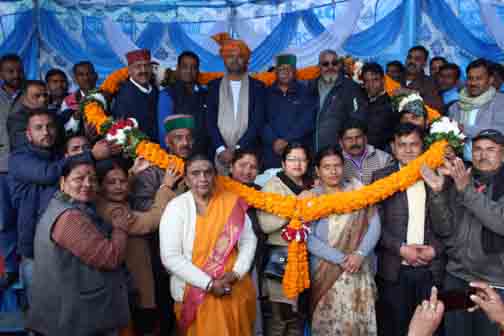 MUSSOORIE, 6 Dec: Rich tributes were paid to the Architect of the Constitution, BR Ambedkar, on his 63rd death anniversary, at a programme organised by the Bhartiya Dalit Sahitya Academy, Mussoorie, at Ambedkar Chowk near Library Bazaar, here, today. People from various political and social organisations and students paid floral tribute to him.

Chief Guest Palika Chairman Anuj Gupta, former chairman Manmohan Singh Mall, former MLA Jot Singh Gunsola and town Congress President Satish Daundiyal also paid tribute. The newly elected Chairman, Anuj Gupta, and 13 ward members were also felicitated by the officials of BDSA. A letter of demands was also presented to Chairman Gupta by BDSA President Sunil Kumar demanding the formation of a museum based on the work and life of Dr Ambedkar, beautification of the Ambedkar Chowk, removal of encroachments, there, and medical facilities for all workers of the Municipal Council.

Gupta assured the gathering that their demands would be fulfilled soon. He said Dr Ambedkar would always be remembered as an original and profound thinker. India had become the most powerful country only due to the Constitution. Baba Saheb asked people to get education and fight for their rights. He said that Dr Ambedkar’s thoughts on economic issues were equally enlightening.

Former MLA Jot Singh Gunsola and former Chairman Mall said that Dr Ambedkar played the role of God to people who belonged to the Scheduled Castes and Schedule Tribes. BJP Leader Anil Godiyal and MP representative Vikas Chauhan said that Ambedkar played a pivotal role, both, pre- and post-Independence, paving the way for a uniform society. He expressed his gratitude to Prime Minister Narendra Modi for issuing two commemorative coins of Rs 125 and Rs 10 on his death anniversary.