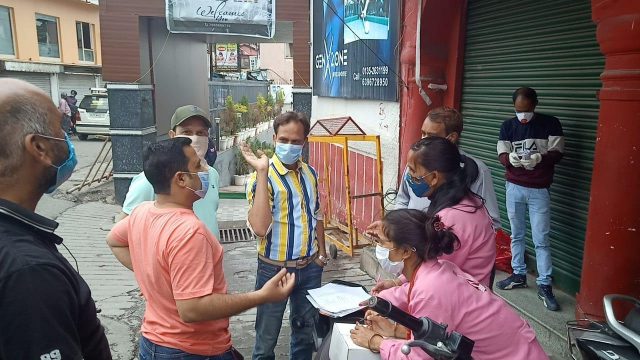 By Our Staff Reporter
Mussoorie, 20 Jun: People who are violating the corona curfew and roaming in the market without masks have been booked by the Police. The health department had conducted corona tests on them after noting their names and addresses. The officials also told people about the rules made for prevention of corona infection.
People roaming about on the Mall Road without masks, today, were accosted jointly by the Police and Health Department and tested. There were some heated exchanges as a result.
The officials of the Mussoorie Health Department organised a camp at Picture Palace Chowk and made people aware about masks and social distancing. Tourists coming from outside are particularly flouting the rules. On Sunday, two dozen people were tested and their names and addresses were noted down. If corona infection is confirmed in someone, then action would be taken as per the rules.