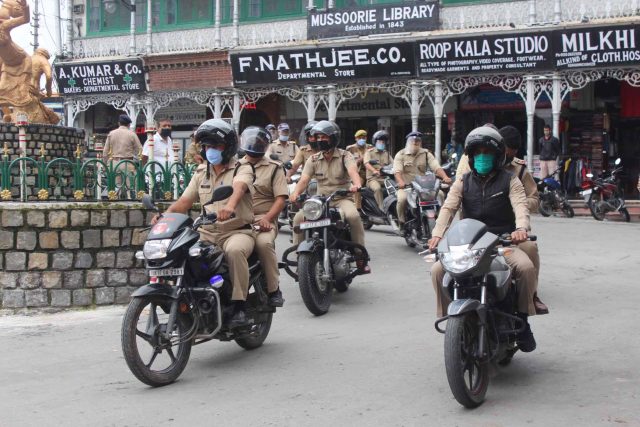 By OUR STAFF REPORTER
Mussoorie, 31 Jul: On the occasion of Bakr-Eid, people of the Muslim community will offer namaz in their homes. The District Magistrate has issued instructions in this regard. The police and administration in the Mussoorie are busy preparing for Eid, as part of which a flag march was held from Gandhi Chowk to Landour Chowk led by Mussoorie police station In-charge Devendra Aswal.
Aswal called for the festival to be celebrated in a peaceful manner. He said that Muslims will offer Namaz in their own homes and not gather in the mosques. It would also be ensured that social distancing would be followed while offering Namaz and meeting each other. He said that animal sacrifice had been banned in public places as per the High Court’s order. He had already met members of the Muslim community, twice, and told them about the advisory issued by the government. He said that security had been strengthened in Mussoorie for Eid. Rakshabandhan would be celebrated on 3 August and, on 5 August, the foundation of the Ramjanmabhoomi temple would be laid in Ayodhya. Security had been tightened in this regard. Present on the occasion were SSI BL Bharti, SI Suraj Kandari, SI Binesh Kumar and SI Neeraj Kathait.