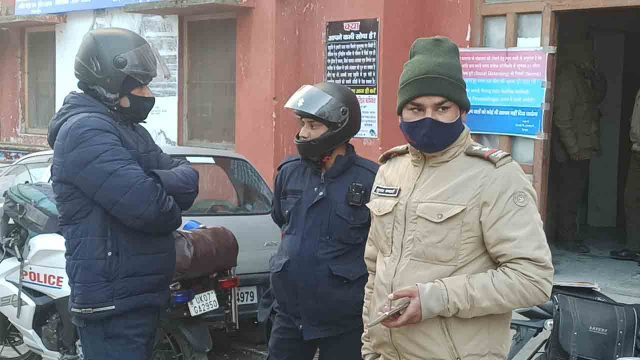 By Sunil Sonker
Mussoorie, 30 Dec: The Queen of the Hills is ready for the New Year celebrations, with 80% hotels having been booked. There is an atmosphere of excitement among the hoteliers as well as the locals, while the police and administration in view of the huge crowd of tourists are making special preparations. An action plan has been prepared for smooth flow of traffic.
Parking has also been specially arranged for the tourists. The administration is also ensuring that tourists coming to Mussoorie do not face any problems; the rules of Covid prevention are being enforced.
The weather in Mussoorie is also changing every moment. There was light snowfall in Mussoorie two days ago. People are hopeful that the New Year celebrations will start with snowfall.
In the meanwhile, there is a complete ban on big events enforced by the district administration in the celebration of New Year.
Local businessman Rajeev Aggarwal, Dharampal Panwar and Pradeep Bhandari said that people come for fun to Mussoorie. In such a situation, it is wrong to ban parties during New Year celebrations. The Hotel Association has requested the District Magistrate to grant exemption. The local shopkeepers and restaurant owners said that Mussoorie is fully prepared for the New Year and they are expecting a huge rush of tourists. This would provide employment to the locals.
They said that all the people are following the rules issued by the administration regarding the New Year and special arrangements have been made in this regard.
CO, Mussoorie, Narendra Pant said that the police are fully prepared for the New Year. Additional force has been deployed to enforce Covid and traffic rules. Violators would have action taken against them. Additional police forces have been deployed in Mussoorie to deal with New Year celebrations and hoodlums. Sub- Inspectors have posted on all the main squares.
SDM Manish Kumar said that the action plan had been prepared in advance by the administration after meetings with all those officials related to tourism.