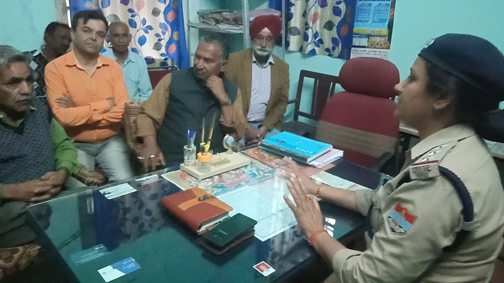 By Sunil Sonker
Mussoorie, 24 May: Mussoorie Police station in-charge Bhawna Kainthola held a meeting, today, with locals regarding arrangements for the upcoming tourist season. She also instructed the shopkeepers of Mussoorie not to keep their material on the roadside as it obstructed traffic.
She declared that local participation was necessary for better arrangements to be made for the upcoming tourist season, so that visitors did not face problems. The timing for entry of heavy and supply vehicles had been fixed till 10 a.m. Those who had kept their goods on the side of the roads were asked to remove these within two days, or the police would take action.
She revealed that adequate police force had been deployed in Mussoorie for the tourism season. A Sub-Inspector, each, had been deployed at every main square of Mussoorie so that traffic could be controlled smoothly. She appealed to the locals and tourists to park their vehicles in the parking lots and not on the roads. She said many complaints had been received against the parking operators for charging excessive amounts from the people. Instructions had been given to parking operators to display the rate list and timings with the telephone number of Mussoorie Police station In-charge and Mussoorie SDM so that tourists could contact them in case of any problem.
General Secretary of the Mussoorie Traders’ Association Jagjit Kukreja said that all the traders and people of Mussoorie were with the administration and police so that tourists and locals didn’t face any problems. He said full support was given to officials so that all the arrangements could be made better. He said a meeting would also be held with Council Chairman Anuj Gupta. He demanded more parking space in Mussoorie to end the problem of traffic jams.