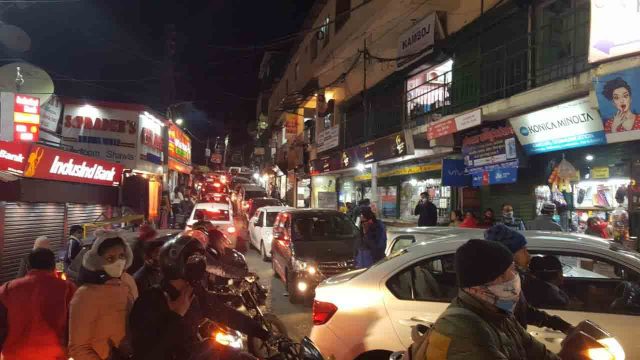 By Our Staff Reporter
Mussoorie, 15 Dec: Mussoorie has started getting ready for the New Year and Christmas festivities and action plan is being prepared jointly by the police and administration. The town is also expected to experience snowfall on these festive days. It is hoped that there would be a crowd of people here on the occasion. In view of the corona epidemic, there are certain restrictions imposed by the government and the High Court, but by undergoing corona tests at the entrance of Mussoorie and Nainital, the tourists can celebrate the New Year free of worries. Every establishment is preparing in its own way to decorate Mussoorie like a bride for the New Year. However, the Mussoorie Winter Line carnival is not being held this year, to the disappointment of many.
RN Mathur, President of Mussoorie Hotel Association, said that due to Covid-19, the tourism of Uttarakhand including Mussoorie had been badly affected. But after the relaxation given by the government, there had been an uptick in the tourism business. The tourists coming to Mussoorie would be able to celebrate the New Year in a party atmosphere. He said that special packages are being prepared for celebrating New Year in the big hotels of Mussoorie, but not by medium and small hotels. He hoped that tourists would turn up for celebration of the New Year.
Mussoorie Police In-charge Devendra Aswal said that the administration and police are fully prepared for the snowfall and celebration of New Year. Special plans are being made and an additional police force has been sought so that the tourists don’t face any problems.
Tourists Kamesh Kumar, Manish Agarwal and Anu Singhal said that Mussoorie is their favourite haunt and they come here repeatedly to enjoy the beauty and clean atmosphere. They are hoping there would be snowfall in Mussoorie on Christmas and New Year, doubling their enjoyment.