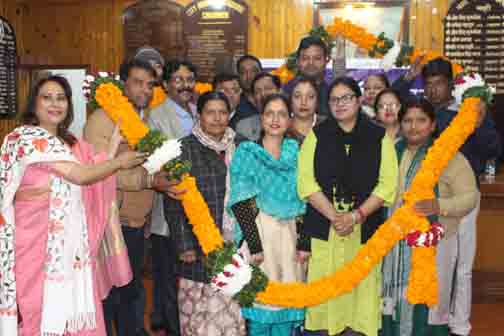 MUSSOORIE, 4 Dec: The new Chairman Anuj Gupta and members of the Municipal Council were felicitated by the Press Club of Mussoorie, today, at a programme held in the Council’s auditorium.
Press Club of Mussoorie Patron Prem Singh, President Bhanu Kala and Vice President Sunil Sonker, along with others members, welcomed the newly elected chairman and members with flower bouquets. Addressing the gathering, Chairman Gupta said that, soon, an action plan would be implemented in Mussoorie for its development. Most of the squares of Mussoorie would be widened so that the problem of traffic jams could be solved. His main aim was to promote tourism in Mussoorie to provide employment to the youth. The Council had limited resources, he said, due to which MMC needed the help of the state government. He would meet Mussoorie MLA Ganesh Joshi so that his projects could be approved by the state government. New schemes would be launched soon.
Member Darshan Rawat said that each and every member of MMC was committed to the people of Mussoorie for its development and also to take action against the problems. The programme was conducted by Satish Kumar. Present on the occasion were Ajit Kumar, Deepak Kumar, Manish Ganguly, Neemkant, Vimal Navani, Sandeep Sahni, RN Mathur, Devi Godiyal, Soban Panwar, Rupchand Sharma, Neeraj Kumar and many others.

Garhwal Post has established itself as a credible, balanced and forward looking newspaper in India. Based in Uttarakhand, the daily is read by the aware, socially and culturally responsible, high-income elite of society.
Contact us: info@garhwalpost.in
https://garhwalpost.in/interracial-dating-canada/ sexy wife date night filipino ofw dating site