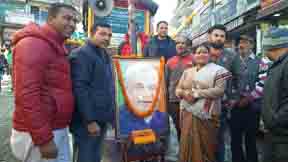 By OUR STAFF REPORTER
Mussoorie, 25 Dec: On the occasion of the 94th birth anniversary of former Prime Minister, the late Atal Bihari Vajpayee, BJP workers gathered at Picture Palace Chowk under the leadership of Mussoorie BJP President Mohan Petwal and paid floral tribute.
They raised slogans in Vajpayee’s memory. Sweets were also distributed among the people. Mohan Petwal said that Vajpayee was praised for his simplicity, despite possessing extra-ordinary abilities. He pointed out that, today, the Atal Ayushman Yojna had been launched by CM Trivendra Singh Rawat.
Present on the occasion were Madan Mohan Sharma, Kushal Singh Rana, Amit Bhatt, Gajinder Singh, Mukesh Danai, Sapna Sharma, Ramesh Khanduri, Anita Saxena, Abhilash, Mukesh, Manoj Rengwal and others.