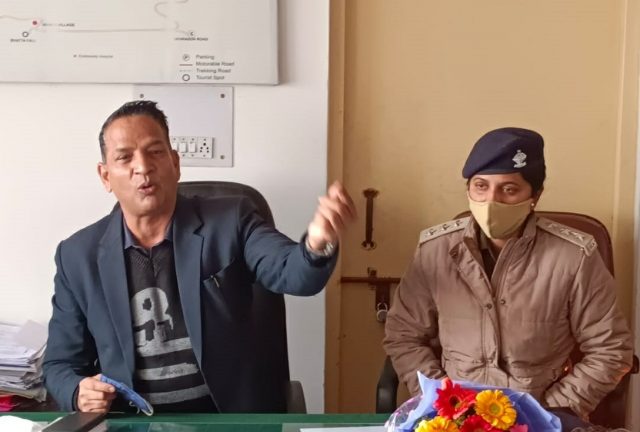 By Our Staff Reporter
Mussoorie, 12 Jan: SDM Naresh Durgapal and CO, Mussoorie, Pallavi Tyagi held a meeting here, today, with representatives of political and social organisations and apprised them about the guidelines issued by the Election Commission and the government regarding Corona precautions.
SDM Durgapal also urged everyone to follow the model code of conduct. He said that strict action would be taken against violators. CO Tyagi said that all the preparations had been completed for the elections in Mussoorie, while sensitive booths had also been inspected so that the elections can be conducted peacefully.
Durgapal said that immediately after the imposition of the Model Code of Conduct, political posters, banners and other publicity material had been removed from government and public property. Rallies would not be allowed. He said that further guidelines would become known after 15 January. Nodal officers have been appointed at the district level. Static surveillance teams have been deployed at the checkpoints to check movement of illicit liquor.
Jagjit Kukreja, General Secretary, Mussoorie Business Board, complained that tourists were being harassed in Mussoorie. Former Municipal President Manmohan, Councilors Sarita Panwar, Sarita Kohli, Mussoorie City Congress President Gaurav Aggarwal, Aarti Agarwal, Suresh Thapliyal, Rajiv Agarwal, Pooran Juyal, Taxi Maxi Association State President Sundar Panwar also offered their suggestions.

Garhwal Post has established itself as a credible, balanced and forward looking newspaper in India. Based in Uttarakhand, the daily is read by the aware, socially and culturally responsible, high-income elite of society.
Contact us: info@garhwalpost.in
https://garhwalpost.in/oracle-compare-dates/ https://garhwalpost.in/dates-holy-week-2022/ jewish speed dating london