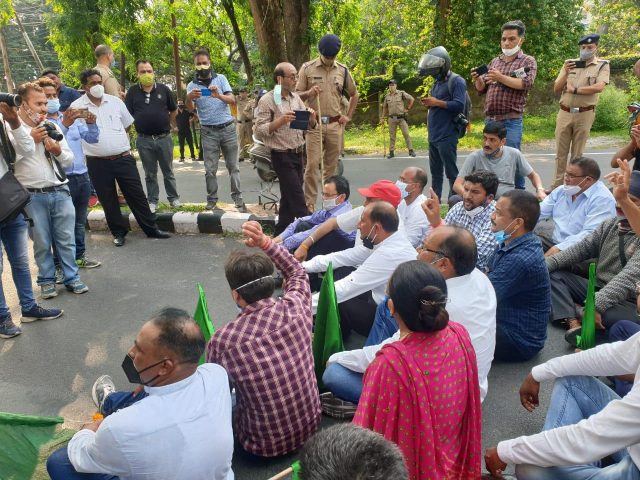 By Sunil Sonker
Mussoorie, 22 Jun: Members of the Mussoorie Traders’ Welfare Association initiated a march from Mussoorie to the Chief Minister’s residence in Doon, today, to protest against the government for ignoring the interests of small shopkeepers in the Corona curfew regulations issued for 22 June onwards. Before that, the traders gathered at Mussoorie’s Picture Palace Chowk and raised slogans against the government. Hundreds of traders walked from Mussoorie towards the Chief Minister’s residence to register their protest.
The agitating traders were stopped by the police at the Mussoorie Dehradun Diversion, further angering the traders. In protest against the police action, the traders sat on the road and protested against the government. They were led by Rajat Agarwal, President of Mussoorie Traders’ Welfare Association.
CO, Mussoorie, Narendra Pant was present on the spot and tried to convince the traders to cancel their protest. The traders expressed their indignation and submitted a memorandum addressed to the Chief Minister. They said they would not end the agitation until their demands were met. The memorandum of demands was sent to the Chief Minister through the City Magistrate. The agitation was postponed till 28 June after an assurance given by City Magistrate Kusum Chauhan on arranging a meeting with the CM regarding the demands being raised. The traders said that, if their demands are not met, the agitation would start again from 28 June. If relaxation is not given by the government, then all the shops and tourism sites would be opened unilaterally.
The traders said that from 22 June, under the Corona guidelines, markets are allowed to open only till 5 p.m., even though bars serving liquor have been allowed to open till 10 p.m. Uttarakhand has been opened for tourists, but tourist sites and shops are completely closed on Saturday and Sunday, defeating the purpose of tourism.
Sandeep Sahni, President of the Mussoorie unit of the Uttarakhand Hotel and Restaurant Association, said that, on the one hand, the government is inviting tourists to Uttarakhand but, on the other, tourists are seeing markets close by 5 p.m. in Mussoorie. They have no place to go causing frustration among them. He demanded that the government amend its policies and markets allowed to open till 10 p.m.
Rajat Aggarwal, President of Mussoorie Traders’ Welfare Association, said the government is ignoring the small traders, while big businesses have been given complete relaxation. He warned that, if the Chief Minister does not take a decision regarding the traders soon, their movement would be intensified at the state level. He threatened traders would open their establishments till late at night as before, irrespective of the guidelines.
Also present were General Secretary Jagjit Kukreja, Treasurer Narendra Uniyal, State Congress General Secretary Godavari Thapli, Dhan Prakash Agarwal, Satish Dhoundiyal, Jagpal Gusain, Garden Welfare Association President Surendra Rana, Chandi Prasad Saklani, Chandrabhan Chauhan, Bhag Singh Rawat, Bharat Rawat, Rajeev Agarwal, Ali Ahmed, Wasim Khan, Kamil Ali, Arvind Sonkar, Ajay Rao, etc. 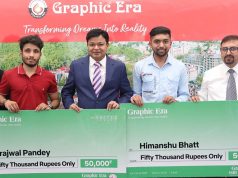 Garhwal Post has established itself as a credible, balanced and forward looking newspaper in India. Based in Uttarakhand, the daily is read by the aware, socially and culturally responsible, high-income elite of society.
Contact us: info@garhwalpost.in
online dating for persons with disabilities https://garhwalpost.in/online-christian-dating-sites/ https://garhwalpost.in/midget-dating-app/