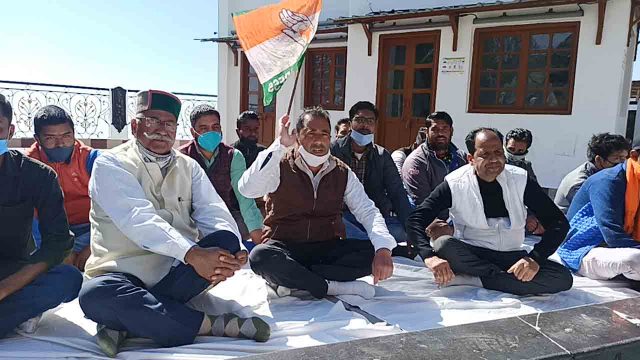 By Our Staff Reporter
Mussoorie, 27 Oct: Activists of the Mussoorie Youth Congress, under the leadership of Wasim Khan, gathered at the Martyrs’ Memorial here, today, and raised slogans against the state and central governments. Khan said that PM Modi and CM Trivendra Rawat constantly talked about providing employment but, unfortunately, unemployment had increased rapidly. The state of law and order had worsened. Inflation had become unbridled. In such a situation, the people of the state would give a befitting reply to the BJP in the elections to be held in 2022 and those of 2024 at the Centre.
Former MLA Jot Singh Gunsola said that Prime Minister Narendra Modi had only worked to mislead the people of the country, while nothing had been done on the ground in the name of development. He said that farmers were upset and committing suicide. But the BJP government remained unconcerned; it had only brought the anti-farmer laws. Rape cases were increasing in various states of the country, women were unsafe, and the law and order machinery had completely failed. Corruption in the state is high and bureaucracy and the officers are unrestrained. No officer is ready to listen to any minister, even the Chief Minister.
Also present on the occasion were Megh Singh Kandari, NSUI Mussoorie President Jagpal Gusai, Gaurav Gupta, Mahesh Chandra, Ankit Gunsola, Ajay Panwar, Abhishek, Dev Prakash, Rajpal Bhandari, Devendra Panwar, Rajesh Sajwan, Kamil Ali, Ankit and many others.