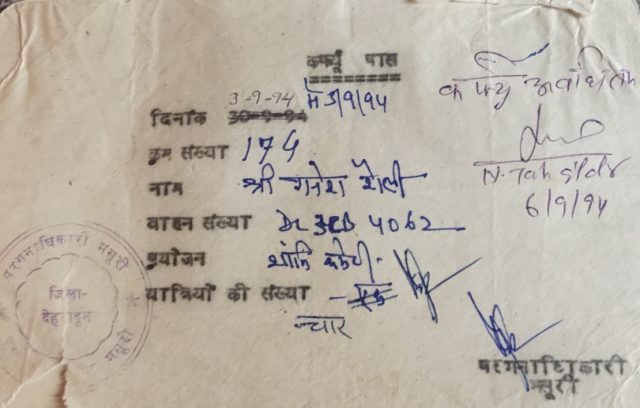 The shrill cry of a cicada startles me. It sounds like a sword against grind-stone reminding me of my ‘baby’ brother Manoj, who, on your run- of-the-mill day is so quiet that you have to hit the defrost button to get a word out of him. It was not always like this. For on the second of every month (after the disastrous events of the September 2nd, 1994) you would find our whole extended family, all ten of us, gathered at ten o’clock outside the Mullingar gate. We were joined soon after by the three Pundir boys: Surendar, Vijendar and Dhanendar. And this was not for Memories of the year after Curfew Pass now a treasured memorabilia A peacful protest march a morning walk – it was a protest march. One cry of ‘Jai Uttarakhand!’ from Manoj and the plaster from the walls of Landour’s buildings bagin to peel. Scenes alike these erupted all over the peaceful mountains from Munsiari to Mussoorie, and from Kathgodam to Kotdwar. How I miss Phasang Lama! God bless her soul! Arrived in her eighties, she would scurry out of the refugee settlement, grab a banner, head to the front ablaze with fervour. At Anupam Chowk, Mannu Malla (later Chairman of the Municipal Board) and his family and others would join us. Thereafter it it was a river in spate, where the only other sound was the whoosh of downed shutters as more took the plunge. But we crept past the Children’s Park in silence, as a mark of respect to the seven people who lost their lives here. Amid the darkness of the movement, there were brief moments of light – thanks to the village idiot, who reeking of firewater blabbered: ‘Give them a shot of Kolti Cognac! They’ll hear Aaj Doh Abhi Doh! Uttarakhand Rajya Doh!’ (Give us Today! Right now! Give us Uttarakhand State!) in far off Lucknow.’ Caught up in frustration, Gyan Chand Yadav, then Mussoorie Station Officer of police, bringing up the rear was heard to mutter: ‘Aa gaya tumhara Uttarakhand! Kolhukhet pahunch gaya! (Its come your Uttarakhand, its reached the toll barrier in Kolhukhet!) A reporter trying to keep up, asks my friend Sudhakar Misra: ‘Who are the leaders of your Uttarakhand Movement?’ Without batting an eye-lid, he snaps: ‘Dorilal Agarwal ji and Narendra Mohanji!’ ‘And who are they?’ he asks. ‘Owner-editors of the Hindi newspapers: Amar Ujala and Dainik Jagran. Their highlighting the remotest parts of our hills helps the movement! They are our leaders!’ Misra ji explains. And the vernacular papers took to listing the names of all protestors. ‘That’s the Hindlolakhal Effect!’ Sudhir Thapliyal, Mussoorie’s media head tells me. ‘At Hindolakhal, in Tehri-Garhwal the boys bullied the stringer into adding their names to print.’ ‘What’s wrong with Mussoorie?’ wondered the irate politicos in Lucknow. ‘What have reservations for OBCs got to do with English medium schools?’ But the tsunami saw upright folks like Douglas Vegais, Principal, Mussoorie Modern School, though weighed down by marigold garlands, nonetheless, heading a protest rally wending through town. Understandably, our schools yearned for peace and quiet, not political upheavals. That would scare away prospective boarders spelling ruin for them. Rumour mills spun tales of how ex-servicemen might train young volunteers in guerilla tactics. Of course newshounds looked high and low. But none were ever found. Ah! The josh of those heady days! When Chand Joshi’s news reports datelined: Somewhere in Uttarakhand appeared, his editor asked: ‘Where’s that place?’ ‘It’s in my head! It’s in my heart!’ Chand replied, adding: ‘But some may never see it.’ Prophetic words – for sadly, he passed away soon after. Up here, the curfew saw me taking Charu Lata Joshi to interview witnesses of the Mussoorie carnage. At best, you can say, it was a risky proposition for a car’s headlights, in the hills can be seen for miles. With curfew in place, we drove by starlight and a prayer. What did we achieve? A single paragraph. When published, one had to look for it with a magnifying glass, lost on the last page. Sometimes you cannot win! How else can one try to explain the stunned silence that reigned throughout the hills that greeted Prime Minister H. D. Deve Gowda’s announcement of the formation of Uttarakhand on 15th August 1996?