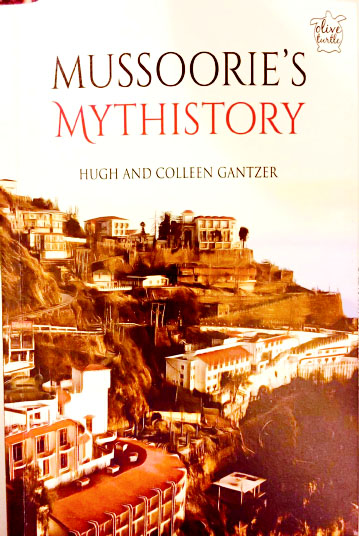 Well known travel writers Hugh and Colleen Gantzer’s latest book ‘Mussoorie’s Mythistory’ is a collection of twelve carefully handpicked and strung together tales. What do they have in common? Well they are set in and around Mussoorie. In this mosaic of stories, history is interlaced with myths along a 19-mileridge, tied together with two hundred year history.
Mussoorie’s mist parts in ‘Mussoorie’ Mythistory’ to reveal alternative endings to some of the tales the town tells. Oftener than not, the Yeti comes visiting minus the misses or the Lidini. The Abominable Snowman hangs around the outskirts of the hill-station in the heart of winter, looking for company and finds one. The snow beast has struck!
Elsewhere you find the hooded Italian Capuchin Brothers of St. George’s College in Barlowgunj having their doors rattled—opened and slammed shut. All the while petrified students look on. Later we are on ‘Burnt Hill’ or Pari Tibba, or the Hill-0f-Fairies but only during the days of the Raj. ‘They are inside the Tara Bhoots. Lakhs of them. They look like little bits of glass.’ Don’t ask the reviewer, the end of this tale. It is a well-guarded secret covered by the Defence of India Act. But writers can always dip into personal diary, can’t they?
‘Fowl Play’ is set in the deep of winter. But starved chickens come out winners, with their ‘special chickenfeed.’ And how could you have a book on Mussoorie without the usual Maharaja or two thrown in for good measure. And that is when you meet the Raja of Shershahir who at 72 enjoys nothing more than the company of young people, especially if they are the kind that stay young – forever.
The author’s love for the hill station gives us delicate images of the saanpka bhutta in the monsoon. All those who have been to school here are familiar with this Pitcher Plant. ‘The snake bhuttas appear when the mushrooms do. They send out a long spike ending in a sinister, cobra-like hood. Inside the hood is a seedpod like a small corn cog. Then, as August progresses, the kernels on the pod start to blush till they turn a brilliant scarlet, warning people to stay away.’
Later, a cabaret show upsets the moral police of the town with interesting results. In ‘Afghan Seed’ Hugh and Colleen take the reader to the unexplored word of the Afghan labourers who built retaining walls. They used no mortar. They used no cement. Yet you will find them intact, having withstood the onslaught of Time. Any visitor to St. George’s College or the Railway School in Jharipani can see for himself these mute tributes to the sheer strength, sweat and tears of these men who shaped these hills into what they are today.
In ‘Flights of Fancy’ the line between dream and reality; myth and legend; fact and fiction blurs to bring the reader into a wonderland of Mussoorie as she could have been. Often you may feel like Harry Potter has just fallen through the rabbit hole and walked into the Mad Hatter.