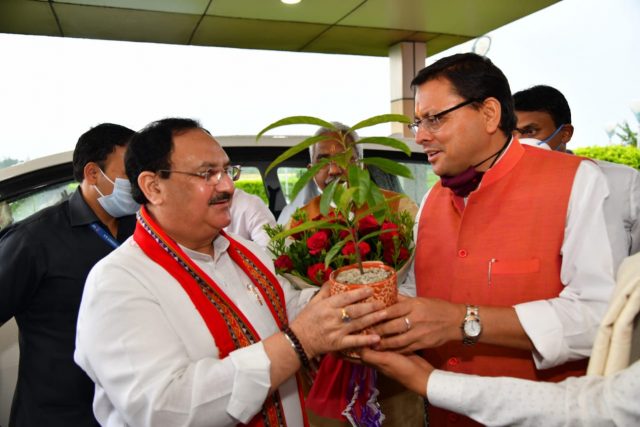 By Arun Pratap Singh
Dehradun, 20 Aug: BJP President JP Nadda, who began a two day tour to Uttarakhand, today, called upon the party leaders to establish direct contact with the people and work towards resolving their problems. He also asked the leaders to frequently tour their constituencies and stay there in order to get better feedback from the people at the grassroots level. He also asked them to focus more on better and effective implementation of welfare schemes and programmes of the government.

He held several meetings today after his arrival at Jolly Grant Airport this morning, where he was received by Chief Minister Pushkar Singh Dhami, State BJP President Madan Kaushik and other senior leaders. He reached a hotel in Bhopatwala where his programmes were scheduled for around 12 p.m. All along the way, he was given a warm welcome by the party workers. This tour is part of the party’s preparations for the upcoming assembly elections in Uttarakhand.
He also held a special meeting with the party MPs, ministers and MLAs, where he asked them to work harder in their respective constituencies and as ministers towards living up to the expectations of the people. He further called upon them to deal with the people in a dignified manner. He stressed that BJP was known for discipline and dignified conduct and the party leaders ought to conduct themselves accordingly. Nadda also spoke to each minister and sought feedback from them in respect of the performance of the departments in their charge He stressed that all the welfare schemes and the development projects under various departments be managed efficiently in order to make a positive difference to society.
He also obtained information about the migration programmes at a meeting organized with party officials and MLAs and gave necessary guidelines. In another meeting with the party office bearers, Nadda asked them to establish better communication with the people at the district, mandal and booth level. He further asked them to make people aware of the achievements of the state and the Union Governments.
On this occasion, State Party President Madan Kaushik, while welcoming the National Party President, discussed in detail the various programmes and campaigns being run by the organisation in the state and claimed that during the Covid period, when the leaders of other parties chose to stay in their homes, the BJP workers were engaged in the service of the people. Kaushik further claimed that, in view of the possibility of third wave of Corona, health volunteers were being prepared at every booth across the state by the party. During the meeting, Nadda said that the workers and leaders would have to stay in their respective districts and constituencies and also nominate the Panna Pramukhs by next month. He asked the leaders of the SC ST Morcha and Minority Morcha of the party to become more active among the SC, ST and Minority voters.
On this occasion, Chief Minister Pushkar Singh Dhami discussed the achievements of the state government and said that it was trying its best to meet the aspirations of the people. Separate economic packages had been announced for self-help groups and tourism sector to help them tide over the crisis created due to Corona.
In the meeting, National General Secretary Organisation BL Santosh, State In-charge Dushyant Kumar Gautam, Co-in-Charge Rekha Verma, General Secretary (Organisation)Ajaey Kumar, Union Minister of State Ajay Bhatt, Former Chief Minister Trivendra Singh Rawat, MP Tirath Singh Rawat, National Media In-charge Anil Baluni, General Secretaries Rajendra Bhandari, Kuldeep Kumar , Suresh Bhatt, and all the ministers, party MPs, MLAs, state level office bearers of the party officials, district presidents and all state president and general secretaries of the various Morchas of the party participated.
Earlier, during his meeting with the National President of BJP, Chief Minister Dhami provided details of his achievements during his month-long tenure in a meeting with Nadda. CM cited 15 important achievements before the National President. The Chief Minister handed to Nadda a booklet prepared for the occasion, who released it. Dhami said that a relief package of Rs 200 crores had been given to the tourism sector affected by Covid 19. A package of Rs 205 crores had been given for the medical and para medical workers. There was a plan to provide preventive medicines to the students of class 10 and 12 to safeguard them from Corona infection. He added that the annual grant to the dependants of martyred soldiers had also been increased by 50 percent.