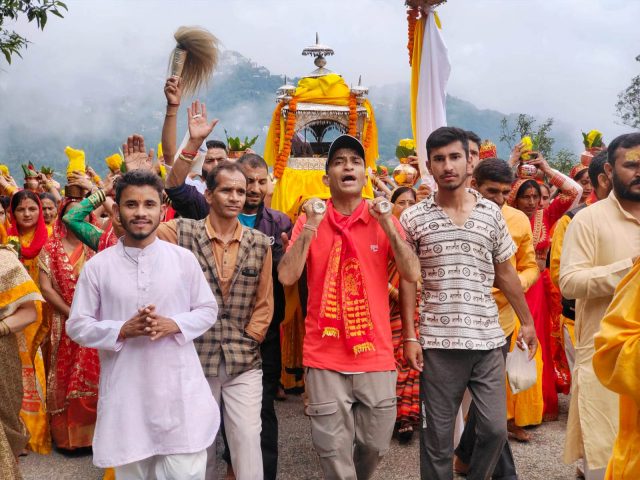 Mussoorie, 25 Jul: Hundreds of devotees of Nag Devta participated in the Kalash Yatra, here, today. The Shiva Mahapuran Mahakatha will be held in the 500-year-old Nag temple.

The Nag Devta Mandir Committee inaugurated the 13th Maharudva Yagya and Shiv Mahapuran Katha at the Nag Temple complex located on Hathipaon Road. A large number of devotees participated enthusiastically in the Doli and Kalash Yatra. Earlier, a Kalash Yatra was taken out from Kyar Kuli Bhatta village, in which a large number of devotees participated enthusiastically. The women covered a walk of about 10 kilometres barefoot with Kalashs on their heads. There is a lot of enthusiasm among the devotees regarding this ritual. Devotees were seen swaying in devotion to the Snake Deity to the playing of traditional musical instruments.

The devotees of Nag Devta started the Kalash Yatra with the Jaimantra of Nagraj. Tourists and passers-by also saw the Doli of Nag Devta at the halts on the way. On reaching the Nag Mandir, the women installed the Kalash in the Shrimad Bhagwat Katha Mandap. After which a large number of devotees had darshan of Nag Devta and performed Jalabhishek of the Shivling and prayed for the prosperity of their families by offering milk before the Idol of Nag Devta.

Local residents Rakesh Rawat and Hoshiar Singh believe that, during the Kalash Yatra, women do not remove the vessels kept on their heads because if this is done then the journey is not considered complete. The elders of the village believe that this temple is 500 years old. A cow is believed to release her milk on a stone for the snake gods to drink. The cow’s owner saw the stone and a snake drinking the milk. Since then, the Nag Mandir was established at this place. The people of Pyaar Kuli Bhatta village started considering the Nagdevta as their Kuldevta. A week before Nagpanchami, this day is celebrated as a festival in traditional costumes and playing of drums.

Garhwal Post has established itself as a credible, balanced and forward looking newspaper in India. Based in Uttarakhand, the daily is read by the aware, socially and culturally responsible, high-income elite of society.
Contact us: info@garhwalpost.in
https://garhwalpost.in/usa-free-online-dating-site/