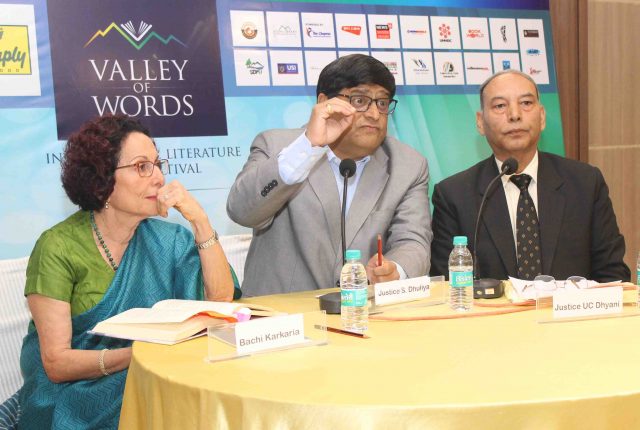 Dehradun, 23 Nov: Well known journalist and writer Bachi Karkaria said today that the famous Nanavati case had not faded from public memory though the incidents happened way back in 1959. It still made an interesting story because of the twists and turns that it saw in the courts of the day and outside, and because of the drama involved around the incident. She was discussing her latest book “In Hot Blood” based on the famous KM Nanavati case along with High Court Justice Sudhanshu Dhulia and retired Justice UC Dhyani.

While Karkaria dwelt on her research on the subject, which included reading the series of reports published in the Russi Karanjia owned Blitz and the copies of the original judgements and noted that the reports published in the Blitz were highly hyped up and melodramatic and painted a picture far from the reality. She added that her account of the case was from the perspective of 21st Century society and mindset. She added that the murder of Prem Ahuja by the naval officer, KM Nanavati, did involve adultery but that could not justify the murder. She also reminded the gathering that the case was initially heard by a jury which got influenced by the drama involving the case and the fact that Nanavati was coming for the hearing everyday dressed up as a naval officer and that the police could not get to arrest him despite the fact that the crime was committed in civilian jurisdiction.

It was a case that shook the whole of India and even the then Prime Minister, Jawaharlal Nehru, had to issue statement on the case though technically it was merely a simple murder case. She reminded that the jury had found Nanavati not guilty, but the judge found the verdict to be perverse and referred the case to the High Court, which found Nanavati to be guilty. Meanwhile, the then Governor of Maharashstra, Vijay Laxmi Pandit pardoned him. An entire constitution bench of Supreme Court sat and discussed whether the governor had outstepped her powers in pardoning Nanavati. Finally, Nanavati was found guilty of murder and handed a life sentence with rigorous imprisonment, although he was finally pardoned and went on to live therest of his life in Canada.

Asked by Justice Dhyani why she chose to write her story so many decades after the incident, she added that the case was still alive in public memory. Also, due to the many Bollywood films made on the incident, namely Yeh Raaste Hai Pyar Ke, Gulzar’s Achanak and now Rustom. The case still offered an interesting and fresh perspective.

Justice Dhulia explained to the gathering how the jury functioned prior to the enforcement of CrPC Act of 1973 which abolished the jury system in India. He felt that it was good from the legal perspective since crime had become more complex now and it required deep legal acumen and knowledge to deal with the cases now on facts and the law. He appreciated the manner in which Karkaria had dwelt upon the jury matters and the judgements related to the case in her book.

Earlier in the day, Robin Gupta was also in discussion with well known journalists and authors Mark Tully and Rahul Singh in respect of his book ‘Milestones @70’, a collection of poems written by him. The book is interestingly dedicated to the memory of Khushwant Singh. When asked by Rahul Singh (who happens to be Khushwant Singh’s son) why the book was dedicated to Khushwant Singh, Gupta claimed that Khushwant Singh was his mentor in life and his writing. Some short poems were also read out by Rahul and Gupta. In particular, Gupta read one poem from the book which is written from the perspective of the Last Mughal Emperor, Bahadur Shah Zafar.

Gupta was asked about his other influences apart from Khushwant Singh in life and he revealed that Jayanto Mahapatra was another major influence in his writings. Tully also appreciated the poems in the collection and recommended that the audience buy the book being sold at the same venue.