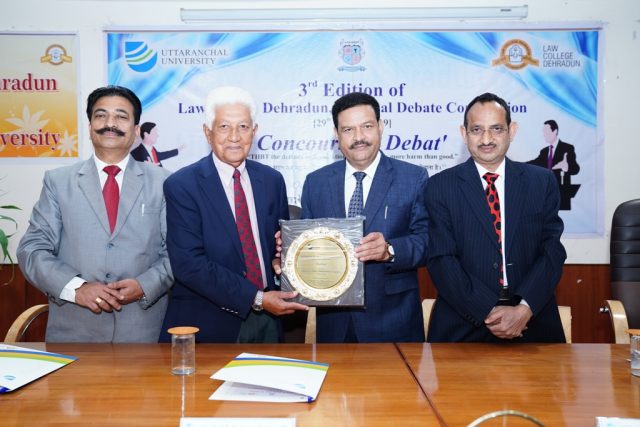 By OUR STAFF REPORTER
DEHRADUN, 29 Mar: A National Debating Competition on ‘Indigenisation of Defence’ was organised, today, at Law College Dehradun, Uttaranchal University.
Air Marshal BD Jayal (Retd) was Chief Guest on the occasion while Dr Suchismita Sengupta Pandey, Dr VP Joshi and Dr GS Chauhan were present as the judges. The topic of the debate was: “This House believes that the defence indigenisation programme does more harm than good”.
Chancellor of the University Jitender Joshi welcomed Air Marshal Jayal and presented a Memento. After the inaugural address by the Chief Guest, an open session was organised in which Jayal offered his views regarding the indigenisation of defence and satiated the curiosity of students about the same. Air Marshal Jayal has been one of the best test pilots of the Indian Air Force. He has successfully flown MIG-21, Canberra and Jaguar aircraft and achieved the glory of taking the first test flight of indigenously developed and upgraded MIG-21.
Air Marshal Jayal explained the background of defence indigenisation in India. He spoke about the modus operandi of HAL and Ordnance Factories. Describing the importance, risk-taking and courage of test pilots, he observed that technological sophistication had ensured greater safety and security of test pilots.
Speaking about the privatisation of institutions manufacturing defence equipment, he supported the idea of transferring these institutions to private sector for strict control. “In spite of adequacy of resources and manpower, due to lack of research and development as well as sound aeronautical policies, we are not able to indigenise our defence needs on expected lines,” he observed. He maintained that indigenisation of the defence programme was indispensable for matching the superiority of major powers of the world. He also said that despite being the third largest military power, India imported defence equipment worth Rs 11 lakh 24 thousand crores.
Arguing in favour of defence indigenisation, participants held politicisation of the issue responsible for its failure. They maintained that the Indian Economy, at present, is not ready for the same as Tejas manufacturing took 32 years for its competition. The Rafael deal and MIG 21 issues also found reference during the debate.
However, opponents of the topic countered the same, referring to the first indigenously developed fighter plane Tejas which was completed ahead of China. They maintained that declaring the whole programme a failure because of a few defects would not be appropriate. The participating universities were Jamia Milia Islamia, New Delhi, Doon University, Dehradun, DAV College, UPES, Dehradun, MPU, Rohtak, MMH College, Ghaziabad, Tirthankar University, Aligarh Muslim University, UP, Army Institute of Law, Mohali, Kirori Mal College, Delhi University, ICFAI University, Dehradun, Devi Ahilya University, Indore, and Shri Guri Ram Rai University.
The Best University (Rolling Trophy) was won by Jamia Milia Islamia, New Delhi; while the Best English Team was Aligarh Muslim University. The Best Hindi Team Award went to Jamia Milia Islamia, New Delhi. The
Best Hindi Speaker was Chandan Prakash Bhardwaj (Jamia Milia Islamia), while the Best English Speaker was Reem Qamar (Jamia Milia Islamia).
Those present on the occasion included Chancellor Jitender Joshi, Vice Chancellor Prof NK Joshi, Principal Dr Rajesh Bahuguna, Dr Poonam Rawat, Amit Kumar, S Anand, Dr Prabha Lama, Dr Suchismita Sengupta Pandey, Dr VP Joshi, Dr GS Chauhan and hundreds of students.