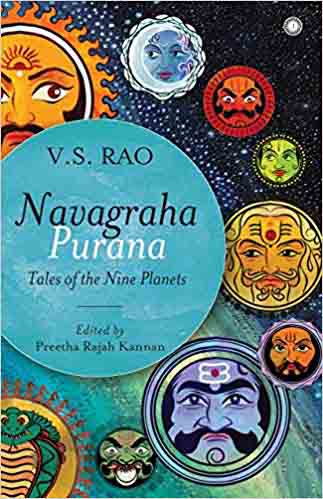 (Nominated in the category of Hindi Translations for the REC-VoW Book Awards, 2019)

Excerpts from the interview with VS Rao: 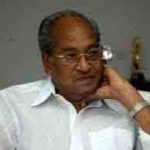 Authors writing mythology choose different sects, like the avatars of Vishnu or heroines of the Granths and Vedas, for example. How did you choose Navagraha or the Nine Planets as the theme of your book?

Long ago, I had an offer to write songs on the Navagrahas for an album, but without the in-depth knowledge of the planetary gods, I would have been unable to do justice to the songs. Hence, began my search for a comprehensive book on the Navagrahas. To my utter surprise, I couldn’t find a single book which elaborately spoke on this topic, except a few booklets of Stotra-Shlokas and handbooks on worship of the Navagrahas.
It dawned on me that there is a need for a book which extensively focuses on the Navagrahas as it would benefit lakhs of devotees who revere and worship them. This in turn made me believe that it would be a great service to the devotees as well as the readers.
As an author, I usually prefer to work on unique subjects (books) and therefore decided to bring an elaborate account of the Navagrahas; from their origination, their life, parents and their progeny.
Epics like the Ramayana, Mahabharata and various other scriptures like the eighteen Puranas acted as my major source of information. I started reading them and this gradually developed into research which resulted in the book. As the book contains the five elements required for a “Purana”, I gave it the name “Navagraha Purana”.

The character of Narad is quite interesting; he seems to be the quintessential manipulator – be it convincing Chhaya to have children or explaining to Chandra why he ought to marry. As the author of this book, what are your views about the character of Narad?

Our Puranas, epics and poetic works have portrayed the character of Narada in a unique and interesting manner. Apparently, Narada is a person who creates differences between people. The behaviour makes people think that Narada is a troublemaker. He intrudes into other’s affairs and creates obstacles. All such activities of Narada appear to be infuriating. But, in the longer run they prove righteous and aim at universal peace.
I would like to add something here: Reading our religious texts and epics, I became an admirer of Narad and admiration goaded me to write a book on his life! After thorough research, I undertook the task and wrote the book in Telugu language, entitled ‘Narada Maharshi’ (translated in English as Sage Narada) and the same has been serialised in a prominent Telugu weekly and won the acclaim of the readers.

This book throughout depicts an image of the people being more mature, open and forgiving than people are nowadays. What lessons can be drawn from this book and how, according to you, are the mythological stories relevant today?

The majority of the episodes and occurrences that appear in the Navagraha Purana were of the ages before Kalyuga (Krita Yuga, Treta Yuga and Dwapara Yuga). Times have changed, people changed, their attire, languages have changed but their instincts, nature, thought processes have not changed. ‘Yugas’ (ages) changed. Man remained a man! Man is controlled by the five organs of senses and five organs of actions; like the man in the past Yugas – with a great change!
There is every opportunity for present day man to mould himself drawing inspiration from the mythical characters which are relevant till date.

VS Rao is a celebrated, multifaceted Telugu author, playwright, translator and scriptwriter. He has 84 titles to his credit, including short stories, novels, children’s books and plays. His writing spans an astounding variety of genres, from crime and detective fiction to thrillers, drama, mythology, philosophy and lyrics for devotional albums. In his largely women-centric writing, Rao passionately highlights women’s issues. He is the recipient of numerous literary honours and awards.