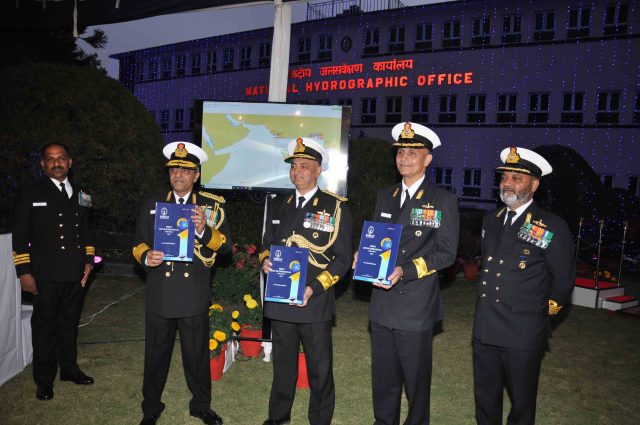 DEHRADUN, 4 Dec: National Hydrographic Office (NHO) was established in 1954 at Dehradun. It is presently headed by Vice Admiral Vinay Badhwar, Chief Hydrographer to the Government of India. This organisation is the hub and National Agency for production of Electronic Navigation Charts and Paper Charts for all Seagoing vessels. The Indian Navy celebrates Navy Day on 4 December every year to commemorate the remarkable victory of India over Pakistan during the 1971 war. This year, Navy Week celebrations at NHO included various activities such as a blood donation camp, quiz competition for school children and exhibition on the Indian Navy and the Hydrographic Department. The Blood Donation Camp was organised on 29 November. It was conducted by Doon Hospital and Red Cross Society, Dehradun. A large number of Indian Naval personnel and civilian personnel from NHO voluntarily donated blood. A quiz competition was conducted at NHO on 2 December. Amrita Badhwar, President, Navy Wives Welfare Association, Dehradun, was the Chief Guest for the function. Eleven school children visited NHO for the function and participated in the quiz competition. Army Public School was adjudged the winner and St Joseph’s Academy was the runner up. The children also were shown various aspects of the Indian Navy and the Hydrography Department by technological demonstration and exhibition. The celebrations culminated with an ‘At Home’ function at National Hydrographic Office premises today. The Chief Guest released the Indian List of Radio Signal Volume I, a publication for mariners which is a comprehensive source of information covering all aspects of maritime radio signals. He also launched Maritime Safety Co-ordination Centre (MSCC), a centre that digitally plot and monitor NAVAREA and NAVTEX simultaneously, on the occasion.