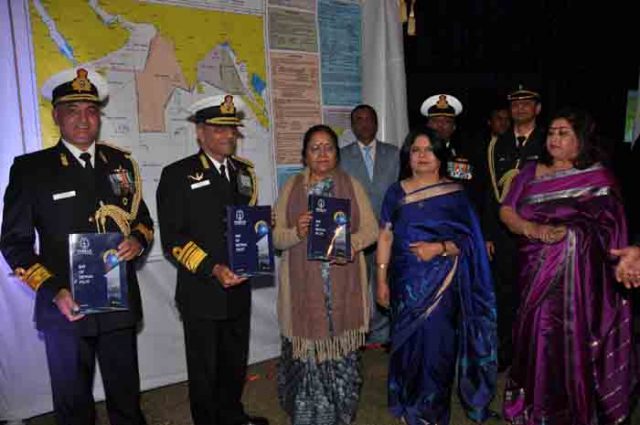 Dehradun, 4 Dec: The Indian Navy’s premier establishment, National Hydrographic Office (NHO), was established, here, in 1954. The organisation, headed by Vice Admiral Vinay Badhwar, Chief Hydrographer, is the hub and National Agency for production of Electronic Navigation Charts and Paper Charts for all seagoing vessels. The Indian Navy celebrates Navy Day on 4 December every year to commemorate the attack on Pakistan’s Naval Assets in Karachi by the Indian Navy. This year Navy Week celebrations held at NHO included various activities such as a blood donation camp, quiz competition for school children and exhibition on the Indian Navy and the Hydrographic Department.
The celebrations culminated with an ‘At Home’ function at the National Hydrographic Office. Governor Baby Rani Maurya was the Chief Guest at the function and released the Maritime Security and Safety Chart, which depicts the Maritime Security and Safety Information in the Indian Ocean Region. The Governor also released the East Coast of India Sailing Directions.
The Hydrographic Department presently has a fleet of eight ocean going survey ships fully equipped with state of the art hydrographic and oceanographic equipment which can measure full ocean depths. The department also boasts of the National Institute of Hydrography, located at Vasco-da-Gama, Goa, which is a premier Hydrographic training institution of National stature and a Regional Training Centre for countries in the Indian Ocean Region. This Institute has till date trained 703 personnel from 37 countries from the continents of Africa, Asia and Australia.
The Chief Hydrographer has a myriad of responsibilities, amongst them being the coordinator for production of navigational charts and promulgation of Navigational warnings in the larger part of the Indian Ocean region. The area of responsibility roughly spans the mouth of the Persian Gulf in the West to the Malacca Straits in the East and up to 30 degrees South of the Equator in the Indian Ocean. The numerous nautical/navigational products manufactured by the Department are made available to the mariners through the Naval Chart Depots located at Mumbai and Visakhapatnam and various chart agents.
The data collected by modern surveying vessels undergoes rigorous verification for quality control prior to its certification as data, which thereafter resides in the Hydrographic Production Database and is subsequently provided to mariners in the form of Nautical charts and Electronic Navigational Charts in accordance with specifications of the International Hydrographic Organisation (IHO) for use in the Electronic Navigational Chart Display and Information System (ECDIS). In addition, the promulgation of marine safety information being very vital, National Hydrographic Office disseminates round the clock Navigational Warning through Global Maritime Distress and Safety Services (GMDSS) through International Maritime Satellites.
The Indian Hydrographic Department contributes significantly to foreign cooperation in the form of providing training in Hydrography and Cartography, assisting countries with capacity building efforts and also conduct of hydrographic surveys overseas. To further international cooperation, the Indian Navy has entered into MoUs in the field of Hydrography with Mauritius, Seychelles and Tanzania and has been assisting various countries viz Kenya, Tanzania, Mauritius, Seychelles, Maldives, Sri Lanka, Bangladesh and Myanmar for training and Hydrographic activities. The Department, in the recent past has conducted training on Electronic Navigational Chart production for trainees from Myanmar, Mauritius and Sri Lanka.

Garhwal Post has established itself as a credible, balanced and forward looking newspaper in India. Based in Uttarakhand, the daily is read by the aware, socially and culturally responsible, high-income elite of society.
Contact us: info@garhwalpost.in
free dating in karachi best real free hookup site dating profile for love island